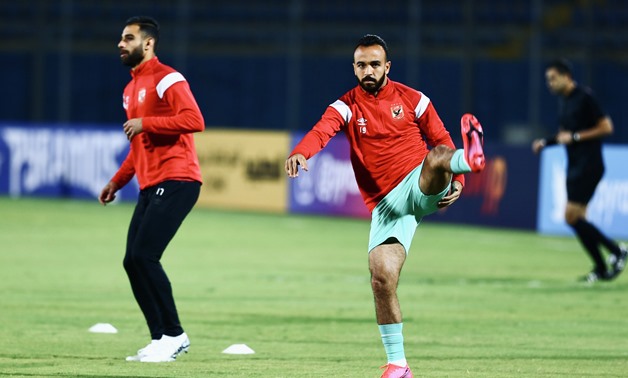 File- Al-Ahly players during the warm-up before the clash against Pyramids, photo courtesy of Al-Ahly Twitter account

Al-Ahly used to play CAF Champions League games at Al Salam Stadium with an all-seated capacity of 30,000 but the club board want to play at Cairo Stadium to receive support from 50,000 Al-Ahly passionate fans who will cheer for the club at this big game.

Al-Ahly, who finished the group stage as runners-up, will face South African giants, Mamelodi Sundowns, in a repeat of their clash at the same round last season, which witnessed a humiliating elimination for Al-Ahly.

The Red Devils suffered a 5-0 loss at the first leg in South Africa and they could not bounce back at the second leg in Egypt which ended with a 1-0 win for Al-Ahly.

The Red Devils have won a record 8 CAF Champions League titles and they aim to achieve the long-awaited title as the club last won the title in 2013.