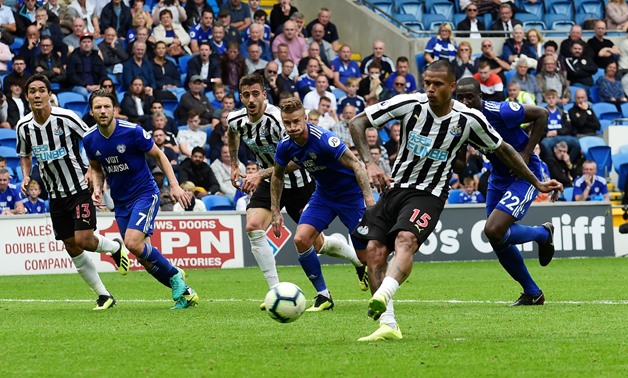 Aug 18 (Reuters) - A nightmare afternoon for Newcastle United's loan signing Kenedy ended with the Brazilian having a penalty saved with almost the final kick of a dismal and goalless Premier League stalemate at Cardiff City.

With Newcastle down to 10 men after a straight red card for Isaac Hayden, Kenedy spurned a golden and unlikely chance to steal all three points, putting a seal on one of the most inauspicious individual displays seen in the Premier League.

The on-loan Chelsea winger, whose poor 96th minute spot kick was kept out by Neil Etheridge, should not even have been on the pitch after his wild kick out at Victor Camarasa went unseen by referee Craig Pawson in the first half.

Kenedy did not even complete a single pass during the first 45 minutes, the first time that indignity has befallen a Premier League outfield player since Blackburn Rovers' Nikola Kalinic against Birmingham City in March 2010.

Asked why the Brazilian took the penalty, awarded for a stoppage time handball by Sean Morrison, after his confidence-sapping afternoon, Newcastle manager Rafa Benitez said: "Kenedy was the designated penalty taker.

"First it was Matt Ritchie (who had been substituted) but then it was Kenedy.

"It was a poor penalty, he's not happy he missed a good chance. We win as a team and lose as a team, I am not concerned about the fact he missed a penalty, he has to take responsibility."

Cardiff manager Neil Warnock said he felt the penalty miss was "poetic justice" after his side had dominated most of the game and because Morrison's handball had actually occurred just outside the box.

"Sometimes you don't get what you deserve. The lad Kenedy shouldn't have been on the pitch. It was straight red, but I never saw it," he told Sky Sports.

"Regarding the penalty, Morrison's hand is outside the box and his body is inside."

A lowlight among many in a game which demonstrated only how difficult victories are going to be for both these mediocre outfits came in the 66th minute with a reckless studs up challenge from behind by Hayden on Josh Murphy.

The midfielder, who had only come on as a substitute at halftime, was shown a straight red but Kenedy's earlier petulant kick out had been even worse as was a later foul by Cardiff's loan signing Harry Arter.