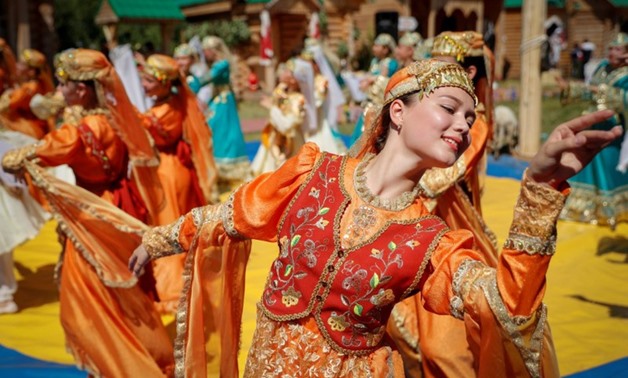 KAZAN, Russia, June 23 (Reuters) - Football fans from around the globe visiting Kazan for the World Cup got a taste of traditional Tatar culture at the Sabantuy Summer festival on Saturday.

The holiday, which celebrates the planting of the crops, has origins going back more than a thousand years and the festival on the outskirts of Kazan attracts thousands of visitors every year.

Traditional singing and dancing, bell ringing, pillow fighting and a game in which blindfolded children attempted to cut hanging fish off string were among the activities.

The showpiece event is a belt-wrestling tournament which once offered the main prize of a sheep but now promises the winner a brand new car.

Among those attending this year were a good number of Colombians in the city to support their team in Sunday's World Cup H fixture against Poland.

"It's so different, our country so different, we are excited and happy to be here," said one yellow-shirted South American visitor.

Kazan, with its sweeping river vistas and historic buildings, has been one of the great beneficiaries of the exposure that the hosting of the World Cup has brought to Russia.

The country's sixth biggest city by population, Kazan is the capital of the Tatar Republic and its inhabitants are fiercely proud of its history and culture.

"I'm really glad because many people arrived from all over the world and our citizens and our guests are becoming friends and they are having fun together," said one local.