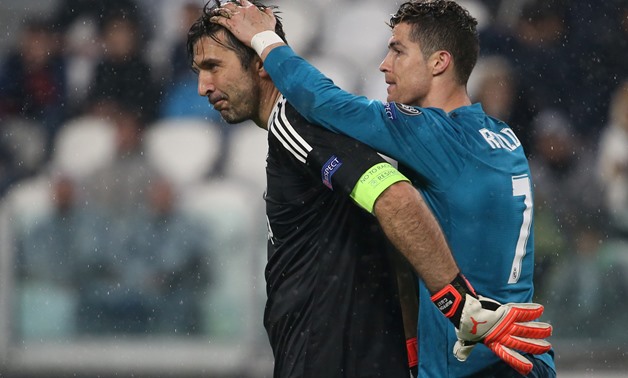 CAIRO – 12 April 2018: Despite scoring nine goals against one of the best goal keepers in football history, Juventus’ Gianluigi Buffon, Real Madrid’s Cristiano Ronaldo has a lot of respect for the veteran goalkeeper.

Ronaldo scored a late penalty as Real Madrid reached the semi-finals of the Champions League in extraordinary circumstances as they lost 3-1 to Juventus on Wednesday at Santiago Bernabeu stadium but won a thrilling tie 4-3 on aggregate relying on the great 3-0 victory back at Juventus stadium one week ago.

Buffon criticized the English referee Michael Oliver for giving Real Madrid’s Lucas Vazquez a penalty in the 92nd minute after being pushed inside the box by Juventus’ defender Medhi Benatia. Buffon was sent-off, in his possible last game in the UEFA Champions League, for protesting.

“To award such a doubtful, or super doubtful, penalty just ahead of the final whistle and destroy the work of a team who gave absolutely everything you have to have a rubbish bin instead of your heart,” Buffon said.

“A human being cannot decide the elimination of a team with such decision. When I don’t feel I’m good enough, I put myself in a corner. He should do the same. It’s a matter of sensibility. It means you don’t know where you are, which teams are playing, you don’t know s***.”


Cristiano Ronaldo had another opinion about the penalty; he said that there was no doubt that Oliver took the right decision.

“I really don’t understand why they were protesting, but football is like that,” he said. “If they didn’t make the foul, Lucas would score the goal. We’re happy to be in the semi-finals.”

Ronaldo met the veteran Italian goalkeeper in the press corridor, hugged him and praised him.

‘I have a lot of respect for Buffon, the words he has said about me, and what I’ve said about him,’ Ronaldo told RTP after the match.