Egypt and Greece reshuffle their players in tonight’s match 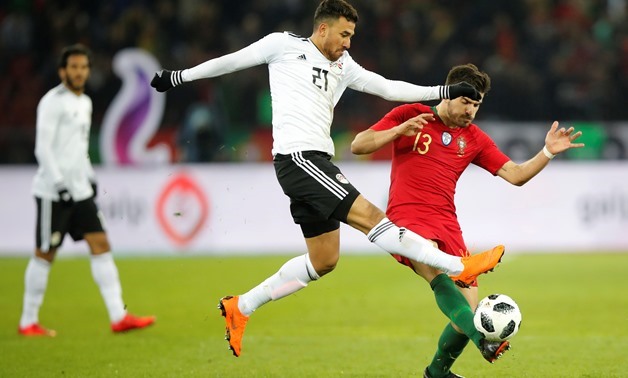 CAIRO – 27 March 2018: The Egyptian national team, the Pharaohs, led by Hector Cuper, will face a new European test at 8 p.m. against Greece at Letzigrund Stadium in Switzerland as part of the Pharaohs' preparation program for the World Cup.

The Pharaohs lost their first friendly match against Portugal 2-1, which was held on Friday evening in the same stadium in the presence of nearly 20,000 fans.

The Pharaohs are looking forward to winning tonight's game and correcting their previous mistakes.

Egypt faced Greece in a friendly game in 1990 after Egypt’s participation at the World Cup in Italy and lost 6-1.

Egyptian players hope to "erase the effects" and bring happiness to Egyptian fans again.
Cuper has held more than one session with the players during the past two days, during which he expressed his great sadness for losing the victory over Portugal in the added time, as well as explaining the mistakes of the team, specifically the defenders.

Cuper asked his players to beat Greece today to make up for Portugal's match.
The coaching staff is set to make minor adjustments to the formation that will begin today's match.

Cuper will give some players the opportunity to take part in the second half, such as Hussein el-Shahat and Mohammed Magdy, Afsha, who were included for the first time in the Swiss camp, for Cuper to judge them on the field.

Greece failed to qualify for the World Cup, after losing in the European play offs to Croatia 4-1.