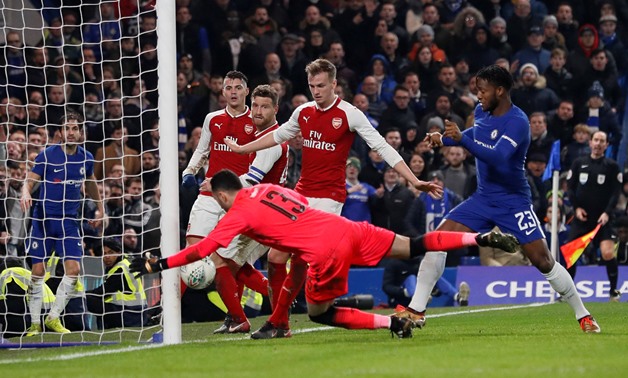 CAIRO – 11 January 2018: Arsenal returned from Chelsea Stadium, Stamford Bridge, with a positive result as the game ended with a 0-0 draw at Carabao Cup semi finals’ first leg. Arsenal will have the upper hand at the second leg at Arsenal Stadium, Emirates, on January 24.

Arsenal players entered the game aiming to reconcile their fans after they lost 4-2 on Saturday to Nottingham Forest at FA Cup.

Arsenal missed their German attacking midfielder, Mesut Ozil, while their manager, Arsene Wenger, kept their Chilean winger, Alexis Sanchez beside him on bench.

Chelsea dominated the game from the start and they created many chances to open the score through Eden Hazard and Alvaro Morata but Arsenal defense managed to keep the ball out of their box to end the first half with a 0-0 draw.

In the second half, Wenger replaced his striker, Alexandre Lacazette with Sanchez and Arsenal started to create chances against Chelsea’s goalkeeper, Thibuit Courtois, and Alex Iwobi had a chance to open the score but Courtois saved it.

Arsenal Egyptian winger, Mohamed el- Nenny participated at the last 20 minutes of the game to replace the injured, Jack Wilshere.

Chelsea failed to score in the remaining minutes to end the game with a 0-0 draw.