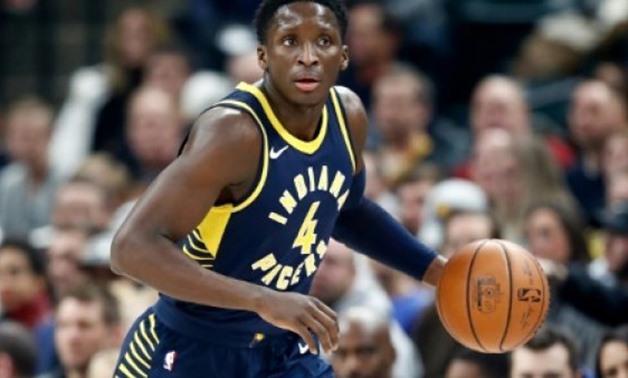 The Pacers drained 15 three point shots to end the run by the Cavaliers, who were trying to set a franchise record with 14 straight wins.

"It was a good streak. We came in here and got beat, so it's time to start a new one," said coach Tyronn Lue.

Oladipo made six of 13 from beyond the arc and Myles Turner finished with 15 points for Indiana.

LeBron James paced the Cavaliers with 29 points on 12-of-22 shooting and also had 10 rebounds and eight assists.

Kevin Love added 20 points and J.R. Smith 15 for the Cavaliers.

"Listen, it was a good streak," said James. "We never talked about it, we just played each game, executed each game. Streaks are meant to be broken, obviously.

"We came in and we knew this was going to be a tough game for us, they've been playing extremely well at home. But we gave ourselves a chance. That's all you can ask for.

"Best thing about this league is most of the time you've got another game in less than 24 hours. We definitely have that."

Cleveland dropped to 18-8 on the season but they will get an opportunity to regroup Saturday at home against Philadelphia, a team they beat 113-91 for win number eight of the streak.

Elsewhere, Kevin Durant carried the undermanned Warriors on his back for the second straight game, finishing with 36 points as Golden State defeated the Detroit Pistons 102-98.

Durant also flirted with his second straight triple-double by adding 10 rebounds and seven assists as the Warriors won their sixth straight. On Wednesday against Charlotte, he finished with 35 points, 11 rebounds and 10 assists.

The Warriors became the 11th team in league history to sweep a six-game road trip. The last team to achieve that feat was the Los Angeles Lakers during the 2008-09 season.

Golden State was playing its second straight game without two-time MVP Stephen Curry, who will miss at least two weeks with a right ankle sprain.

"We are missing points. We can't wait for him to get back," said Durant of Curry.

Golden State is dealing with a number of injuries but got some good news Friday as Draymond Green returned to the lineup and dished out 13 assists. He missed the last game with a sore shoulder.

- Ginobili to the rescue -

In San Antonio, it was like a giant hand reached up and turned back the clock as 40-year-old veteran Manu Ginobili nailed a 26-foot three-pointer with five seconds to play to lift the San Antonio Spurs to a 105-102 victory over the Boston Celtics.

The game was tied 102-102 after a basket by the Spurs' LaMarcus Aldridge with 92 seconds to play. Two Kyrie Irving misses, an Aldridge turnover and a miss on a three by San Antonio's Rudy Gay that Ginobili scooped up on the baseline with 25 seconds to play set the stage for his game-winner.

"He's one of the best players at the end of quarters I've ever seen," Celtics coach Brad Stevens said of Argentina's Ginobili.