By: Egypt Today staff
CAIRO – 21 November 2017: Mahmoud Fayez, assistant coach of the Egyptian national team, revealed that Hector Cuper, the team`s coach, refused to play friendly matches against any of the Arab or African teams.

Cuper preferred to play friendly matches against European and South American teams, as they are likely to meet them in the 2018 World Cup.

The International Federation of Football Associations (FIFA) announced that the 2018 World Cup draw ceremony will be held December 1 at the Kremlin Palace Ballroom in Moscow.

The draw requires that two teams from one continent not be in the same group – except for Europe, which has 14 teams.

According to the draw rules, Egypt will not be with Sweden, Denmark, Iceland, Costa Rica or Iran, considering that these teams are in the third category with the Pharaohs.

The Confederation of African Football (CAF) has postponed the match between Egypt and Niger in the African Cup qualifiers in order to give more time to the African teams participating in the World Cup to be well prepared for the expected tournament.

Egypt has already qualified to the World Cup since the fifth round, after beating Congo 2-1 at Borg El Arab Stadium. The team still occupies the first place in the group, which includes Congo, Ghana and Uganda.

Cooper had confirmed that he would play four to seven friendly matches before the World Cup. 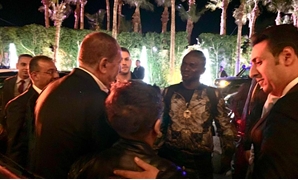 Know all the CAF awards winners