To Orange: do not humiliate the elderly 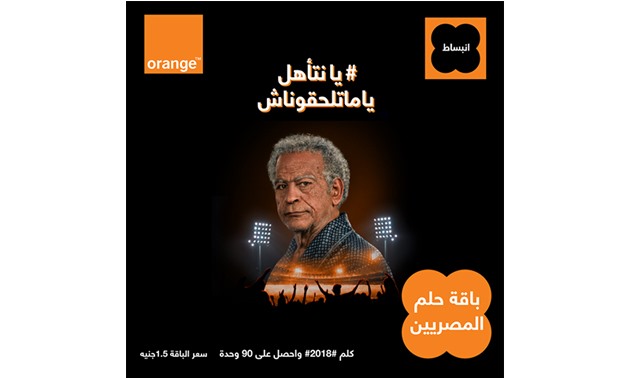 CAIRO – 10 September 2017: The telecommunication company, Orange Egypt, recently launched a campaign to support the Egyptian football national team in the World Cup 2018 Qualifiers. The campaign includes a televised advertisement, billboards and a hashtag, #يانتأهل_ياماتلحقوناش, which translates to “either you qualify or you won’t catch up to us”.

It portrays lonely elderly people in hospitals and houses using medications while singing, “If you [the national team] don’t reach the world cup, we won’t ever witness the moment, it is now or never.”This basically implies that they will “die”, as they suffer from so many diseases such as Alzheimer’s and may not make it to see the World Cup after.

The offensive advertisement depicts aging in a negative light and raises many questions on the marketing ethics followed by international companies, such as Orange.

On September 4, the company issued a press release to launch the campaign. The press release reads: “The creative execution is a cool humorous rap song sung by old football fans that are really getting old and are suffering from aging problems as well as stress and pressure from wasting chances to qualify to the World Cup for the last 28 years. They ask our national team to man up and make it this time as they do not have the luxury of time to wait for another four years. It is their literal last chance to see our national team in the World Cup.”

The press release added that “Sports are a powerful agent of peace, and shows how we can cherish and embrace our rivals while also treating each other with respect.”

We wonder if “treating each other with respect” was part of the brainstorming discussions on how this campaign features people of advanced age. How does such an advertisement relate to our culture that ingrains elderly honor and respect in everyone, and promotes treating them with dignity?

The private sector has a social responsibility to initiate campaigns and ideas that respect various segments of society and promote their rights including women, men, children, youth, elderly and people with disabilities. The type of campaigns that they follow usually combine social issues with marketing, this is translated in campaigns supporting gender based violence survivors, cancer survivors, women and girls’ empowerment, coexistence and other vital social issues.


On social media, the advertisement warranted many comments rejecting the idea of using elders and presenting them in such a humiliating way, while some users thought it was funny, turning a blind eye to how the elderly would receive this message indicating that they are living their literal last days. The advertisement injected humor into a situation that is not funny to begin with.

Monitoring the messages sent through commercial advertisements is not limited to Egypt. In April, a Pepsi advertisement with Kendall Jenner as a protest was pulled after huge backlash for being insensitive and disrespectful for the “Black Lives Matter” movement.

The company said in a statement: "Pepsi was trying to project a global message of unity, peace and understanding. Clearly, we missed the mark, and we apologize. We did not intend to make light of any serious issue. We are pulling the content and halting any further rollout.”

In 2016, the clothing company, Gap, pulled its advertisement for kids which depicted a 12-year-old white girl leaning her arm on an 8-year-old black girl. The two are adopted sisters, but critics perceived the commercial as "racist”. Gap replaced the image in its campaign and apologized for the unintended racial message.

meet the kids who are proving that girls can do anything.

Many other campaigns and advertisements were banned for encouraging negative practices such as body shaming and objectifying women.