Jellyfish are invading the North Coast 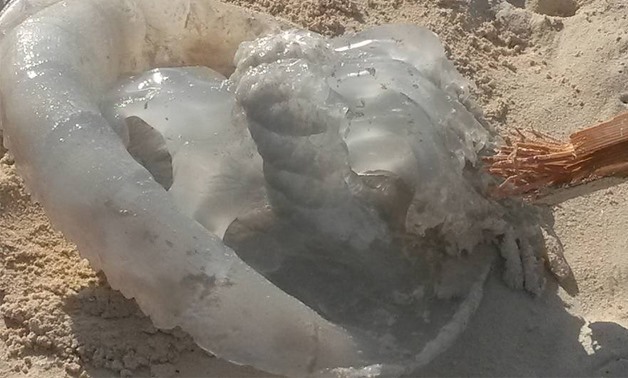 CAIRO – 28 June 2017: If you are planning to spend your summer in the North Coast, beware the jellyfish “invasion.”

Jellyfish have been seen in large numbers in the North Coast and are moving westward in the Mediterranean.

The kind of jellyfish that are showing up on the shores are Rhopilema Nomadica, which can cause painful stings. According to CABI, Rhopilema Nomadica is a medium-sized rhizostomid medusa. It has a nearly hemispherical umbrella, thickest centrally, thinning gradually towards margin.

The Middle East Eye reported that the Nomadica jellyfish was introduced to the Mediterranean Sea through the Suez Canal, adding that large numbers of the jellyfish pose a danger to the eastern Mediterranean beaches because they threaten tourism and block the outlets of coastal power and desalination plants.

“People don’t know that the invasive species can cause economic problems in the long run by threatening fish stocks across the area,” Professor Jason Hall-Spencer of the School of Biological and Marine Sciences at Plymouth University, UK, warned.

As for how to treat a jellyfish sting if you do get one, vinegar is apparently the best solution. According to an article in the Guardian last month, scientists have discovered that “applying vinegar is the best solution, and that popular remedies including urine, lemon juice, and shaving foam could make the situation worse.”