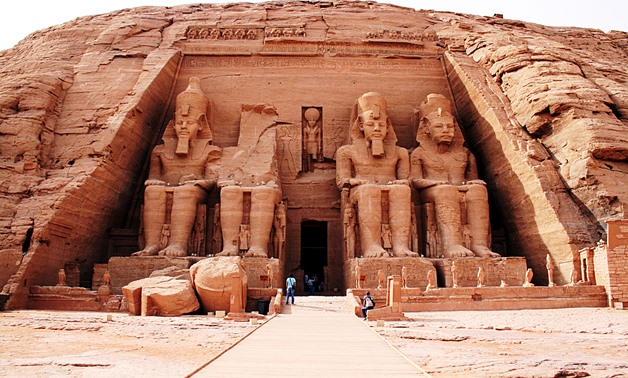 When my granddaughter picked up a magazine and read a report about Abu Simbel temple project, she asked some questions about the project and the story of the solar alignment on the face of Ramses II as she knows I am one of the teams who worked in the project.

On February 22, the sun illuminates the four statues of King Ramses II. I would like to share some details concerning the project of Abu Simbel temples.

The United Nations Educational, Scientific and Cultural Organization (UNESCO), some joint venture companies, and the Ministry of Tourism and Antiquities had made tremendous progress over 5 years to complete the relocation of Abu Simbel temple away from Lake Nasser to save it from the rising water of the High Dam.

Since the two temples are carved inside mountains, the ceilings, walls and the blocks were marked before cutting them so they can be rebuilt again. The cutting lines of the statues were carefully chosen; the new site was chosen to conserve the same direction of the sun alignment.

The phenomenon of the solar alignment on Ramses II statues attracts a lot of tourism to Egypt, to enjoy the antiquities, and to know more details about the Abu Simbel Temples. This phenomenon occurs twice a year on October 22 and February 22, marking King Ramses’ birthday and coronation, respectively. In addition to the beautiful drawings on the walls and ceilings, which show the marvelous art of the temple, visitors are encouraged to observe the three faces of the statues because they reflect different facial expressions: one of them is smiling, the other is not and the third looks sad.

Lake Nasser is famous for sailing, fishing, and alligators. The area surrounding the lake is equally important; the abandoned east side of Nasser Lake could be wisely used by the government via using local mud to build bungalows for tourits. This place could be named Abu Simbel Oasis.

In this area, a visitor can watch the stars shinning in the sky and the moon light, especially in the middle of each Islamic month when the moon light covers the lake. So, it is highly recommended to build a great hall with a dome made of glass to watch the sky at night. The construction of an astronomy station on the east side of Lake Nasser will encourage many people to come to Abu Simbel and watch the sky and stars.

Furthermore, the green area on the east side should be maximized to supply people with their needs; new plants can be implanted since water, soil and laborers are available.

Building a fish factory will increase exports, turning Lake Nasser into an added-value for the residents of Upper Egypt. Traditional art and handmade products of the locals must get the needed support to expand to provide special souvenirs for the tourists. A NASA satellite image, taken by one of the Expedition 25 crew members on the International Space Station, shows the lights of Cairo, Alexandria and the Nile River, Egypt October 28, 2010. Egypt's population has now reached 100 million and according to Aleksandar Bodiroza, representative of the U.N, the pressure Egypt faces is acute. 97% of its people live on just 8% of its territory, crowded along the Nile, Egypt's population is growing by 2.5 million people a year and six people in ten are under 29 years old. Picture taken October 28, 2010. NASA/Handout via REUTERS

Dr. Farouk El Baz, the famous Egyptian space scientist and geologist, may consider examining this wonderful site and giving his opinion on constructing this astronomy station.

I hope that Minister of Tourism and Antiquities Dr. Khalid el-Anany reads this article and I am ready to give more ideas to boost tourism in Egypt.