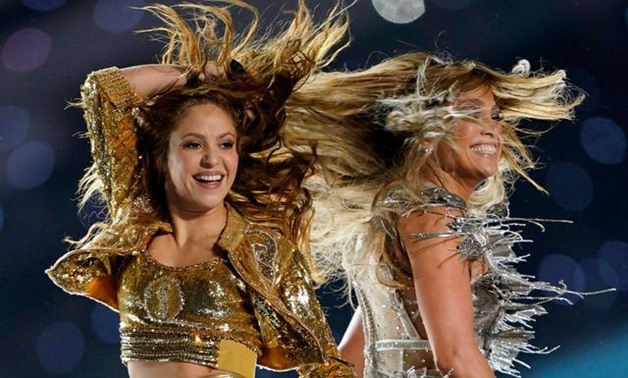 Latin artists Bad Bunny and J Balvin, in addition to Lopez’s 11-year-old daughter, appeared as surprise guests in an extravaganza that signaled its Latin American influences from the onset, when Shakira greeted the stadium audience in Spanish with “Hola, Miami.”

The performance also made a subtle nod to the current political climate in the United States. One sequence in the show featured children in illuminated pods that looked like cages. It was an apparent reference to U.S. immigration enforcement under President Donald Trump that put mostly Latin American boys and girls in holding cells, a practice that caused public outcry.

Dressed in a sequined, ruby-red outfit with matching boots, Shakira led her team of dancers through snippets of hits such as “Whenever, Wherever” and “Hips Don’t Lie.” She was joined on stage by Puerto Rico’s Bad Bunny before giving way to J. Lo.

Lopez made her entrance in black leather and studs on a stage set resembling the top of the Empire State Building, as “Jenny from the Block” proudly announced she was from the Bronx, New York.

The 12-minute halftime show, along with commercials, has become a popular feature of the Super Bowl spectacle on par with the game, which draws some 100 million television viewers in the United States.

J. Lo, a Bronx-born child of Puerto Rican parents, rose from humble roots to become an international star of Hollywood movies and popular music with her own fashion and fragrance lines.

As her set progressed, she changed in a wink into a lacy body suit that highlighted a fit, youthful appearance belying the singer’s 50 years.

Sharing stage with Colombia’s J Balvin, J. Lo strutted to hits such as “On the Floor,” and showed off the pole-dancing skills she honed for the 2019 movie “Hustlers.”

The camera then panned the “children in cages” motif that blended into an appearance of a choir led by Emme Maribel Muñiz, Lopez’s daughter with her ex-husband, singer Marc Anthony.

Next came a mash-up of the Lopez hit “Let’s Get Loud” with Bruce Springsteen’s “Born in the USA,” during which Lopez unfurled a rectangular boa with the U.S. flag on one side and the Puerto Rican flag on the other.

It was a reminder that Puerto Ricans - hit by a Category 5 hurricane in 2017 and more recently set back by a series of earthquakes - are Americans, too.

Shakira, 43, who is from Barranquilla, Colombia, had let it be known in the build up to the show that she sympathized with Latinos in the United States, where anti-immigration rhetoric has become more open in recent years.

“Latinos are going through a difficult time in the U.S. right now, and I think it’s very important for us to convey a message of unity,” Shakira told reporters on Thursday.

This year’s Super Bowl broke ground for women in high places, including in the ownership of both teams (Denise York of the 49ers and Norma Hunt of the Chiefs), and on the sidelines, where San Francisco’s offensive assistant Katie Sowers became the first woman to coach in a Super Bowl. [nL8N2A10GS]

The Super Bowl halftime once featured university marching bands but has evolved into a showcase for A-list talent, including Michael Jackson, the Rolling Stones, Madonna and Lady Gaga.

One of the more notable performances came in 2004 when Justin Timberlake tugged on Janet Jackson’s top, briefly exposing a breast adorned with a nipple shield. The U.S. Federal Communications Commission sought to fine broadcaster CBS $550,000 for indecency over the incident, which Timberlake famously dubbed a “wardrobe malfunction,” but the fine was overturned in the courts.