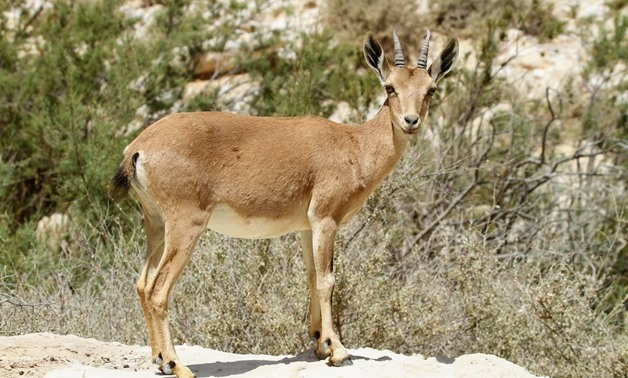 CAIRO- 21 January 2020: Egypt has a total of 110 animal species, including 70 species threatened with extinction due to climate change impacts and poaching, said Ayman Hamada, director of Biodiversity Department at the General Directorate of Nature Conservation.

"Climate change, habitat fragmentation due to human interference, and over harvesting are the main reasons behind the big loss in biodiversity,"he told reporters.

“In spite of the fact that there are some mammals that are threatened with extinction, we can save them in case all factors of pollution, pet trade, and other elements [the above-mentioned reasons] are alleviated,” he told Egypt Today, giving further details on the seven animals proneto extinction.

"The Egyptian tortoise,which is considered a pet in many Egyptian houses, is the most threatened mammal with extinction due to illegal trade and poaching," says Hamada, adding that the Ministry of Environment considers all standards that were laid by the International Union for Conservation of Nature (IUCN) when it announces that any species could become extinct.

“The tortoise is threatened with extinction from its natural environment along the Mediterranean coast. They can be seen in only two places that we cannot reveal for their protection,” he said.

The first global warning of Egyptian tortoise extinction was stated by the IUCN in October 1990, saying that the Egyptian tortoises “are increasingly endangered by habitat destruction and collection from the wild.” To save this species, Egypt has signed the Convention on International Trade in Endangered Species of Wild Fauna and Flora (CITES).

"The second species at the top of the list is mountain gazelle. Egypt had three types of gazelles; one of the three species, the mountain gazelle,became extinct dozens of years ago,"said Hamada, revealing that over the past 30 years, Gazellaleptoceros (aka Slender-horned Gazelle) cannot be seen.

Mountain gazelle was put on The IUCN Red List of Threatened Species in 2016 as the population of this species has declined to 2,500 individuals worldwide. “The third type is the dorcas gazelle and it became threatened with extinction. The main reason threatening all the Egyptian species is poaching,” he added.

According to Animal Boi, mountain gazelles are considered one of the animals that have horns in females and males. They exist in other areas in the Middle East such as Palestine, Jordan, and Syria. “As for Sinai’s tiger, it is considered extinct,” hesaid, adding “I have stayed for many weeks in the desert tracking any evidence of its existence. But I found nothing.”

The tiger has become extinct due to hunting it and its food (rabbits and deer), the matter that causes an imbalance in the ecology system. “All these factors pushed this strain of tigers to find another place to search for food. Seeing it became impossible,” he continued.

Saint Catherine Protected Area in South Sinai was the natural environment for these leopards, according to the Ministry of Environment's data. The head of Elba National Park in the Red Sea told Youm7 newspaper in 2016 that some local residents saw a Sinai leopard, adding that this species was also seen in 2014 when a leopard attacked a herd of sheep. Sinai leopard was registered as a vulnerable animal at the Red list.

However, a report issued by the CITES in the Seventeenth meeting of the Conference of the Parties in Johannesburg,South Africa on September 24 –October 5,2016, said that Sinai tiger's presence has not been detectedsince 1995.

"Cheetah, the fastest land animal in the world, was seen in Egypt 20 years ago. However, it cannot be said that it has disappeared, but it is quite difficult to see it," Hamada said.

According to National Geographic, cheetahscan drink once every three to four days, and their speed ranges from 0 to 60 miles an hour in only 30 seconds.
It has been registered as a vulnerable animal on the IUCN red list in 2015 as their number has decreased, recording 6,674 individuals around the globe. However, the UN Wildlife Day data says that the number of cheetahs reached only 7,100 in the wild. This strain lives in desert, grassland, savanna and shrubland.

“Cheetahs have vanished from approximately 90 percent of their historic range in Africa, and are extinct in Asia except for a single, isolated population of perhaps 50 individuals in central Iran,” the UN Wildlife Day said.

IUCN said that the presence of cheetah is uncertain in Egypt, Djibouti, Libya, Somalia, Sudan, and Togo. Nubian ibex
"Nubian ibex is one of the animals which are less vulnerable to extinction," said Hamada. It was announced as “vulnerable” on the IUCN Red List.

It exists in the Sinai Peninsula’s St Catherine Protectorate, where the population was estimated at200 to 250 individuals, according to a study titled "Predicting the Status and Distribution of Nubian Ibex in the High Altitude Mountains of South Sinai by the Nature Conservation Sector, Egyptian Environmental Affairs Agency in 2010."

It lives in desert, rocky areas, shrublan, and mountains and is still extant in Egypt, Israel, Jordan, Oman, Saudi Arabia, Sudan, and Yemen. However, it was announced extinct in Lebanon. "It is threatened with extinction in a degree less than all the previously mentioned species," said Hamada.

In 2008, it was announced as one of the animals that can possiblly become extinct by the IUCN as its number- at that time-rangedbetween 5,000 and 10,000 individuals. Egypt, Algeria, Chad, Libya, Mali, Mauritania, Morocco, Niger, Sudan, and Tunisia are their natural habitat. The Barbary sheep is a species of caprid (goat-antelope) native to rocky mountains in North Africa- CC via Flickr- Dennis Jarvis.


Hamada said that other species like striped Hyena are also endangered with extinction, adding “hundreds of years ago, Egypt had Jirafas and lions, which became extinct due topollution, climate change, and the shortage of natural resources.