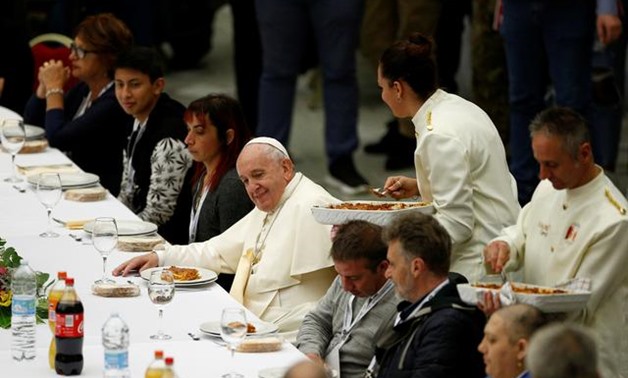 Pope Francis attends a lunch with the poor after celebrating a Mass marking the Roman Catholic Church's World Day of the Poor, in Paul VI Hall at the Vatican, November 17, 2019. REUTERS/Guglielmo Mangiapane

VATICAN CITY (Reuters) - Pope Francis hosted 1,500 homeless and needy people for lunch on Sunday as the Roman Catholic Church marked its World Day of the Poor.

The menu for all in the Vatican’s large audience hall, including the pope, was lasagna, chicken in cream of mushroom sauce, potatoes, sweets, fruit, and coffee.

The pope’s guests were brought to the Vatican by volunteers of charity groups who help them daily.

All last week, a mobile clinic was set up in St. Peter’s Square where volunteer doctors have been giving the poor free specialist health care. General care is available year-round nearby, another of Francis’ initiatives.

Earlier, at a Mass for Rome’s needy in St. Peter’s Square, Francis said those better off should not feel “annoyed” by the poor but help them as much as possible.

He said they should ask themselves: “Do I, a Christian, have at least one poor person as a friend?”

Francis established the yearly worldwide Catholic observance of the day in 2016.