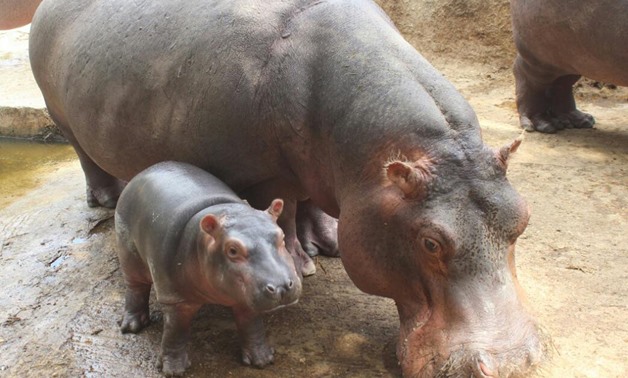 According to Maha Sabry, the director of Giza Zoo, the newborn hippo is 13 days old, and is always kept with its mother inside an isolated lake, for the sake of its protection. “[The newborn hippo] is rarely removed from the water at the present time, and the delivery process was underwater in addition to breastfeeding, and soon will be available to the public as well as the Kudu and the Arabian Oryx,” she said.

The hippopotamus is a huge African Herbivore and is commonly known in Egypt as “Sayed Qeshta.”

The hippo is a semi-aquatic animal that inhabits lakes and rivers in Africa and lives in groups. It stays most of the day in the water or mud until it cools. Herding is an activity performed by each animal alone, i.e., that they do not gather as they do in the water near each others.

Native to the deserts of Arabian Peninsula, the Arabian Oryx is considered endangered due to uncontrolled hunting and capture. It went extinct in the wild in 1972, but rescue operations took over, and transferred to zoos for captive breeding.