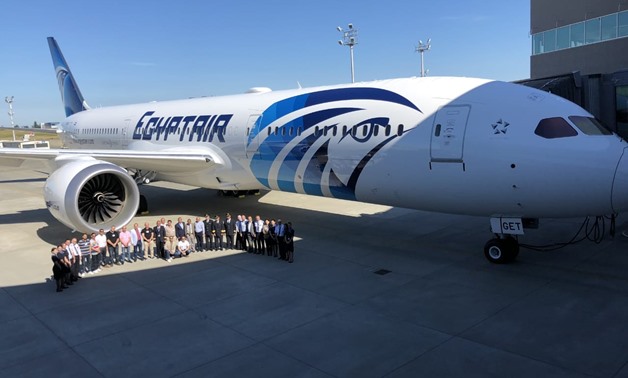 CAIRO – 1 July 2019: EgyptAir received the fourth B787-9 Dreamliner jet, as part of the country’s plan to support its fleet with dozens of new aircrafts of different models. The new jet’s first destination is set to be Paris.

As the new aircraft joins the fleet on Monday, Egypt will have received four B787-9 Dreamliner jets as part of a plan to buy six jets of the same model. The fifth and sixth jets will join the fleet in July.

These new aircrafts will fly to different destinations, including Washington, Frankfurt, Paris, Kuwait and Dubai.

“We are making these investments to give our passengers better flying experiences and further demonstrate our dedication to providing a five-star airline service,” Chairman and CEO of EGYPTAIR Airlines Ashraf el-Kholy previously said.

The first two planes of that model arrived in Egypt in March and April, respectively. By 2020, a total of 33 new jets will have joined EgyptAir’s fleet, in addition to six Boeing 787-9 Dreamliner jets, 12 Airbus A220-300 planes, and 15 Airbus A320neo aircraft.

A Boeing 787-9 Dreamliner jet has 309 seats divided into 279 seats in the economy class, and 30 Super Diamond seats, which can turn into full-flat beds. The plane can fly for a distance ranging between 14,800 and 15,700 kilometers without transit. The aircraft’s fuel efficiency is 20 percent while its accuracy of quantity take-off is 99 percent.