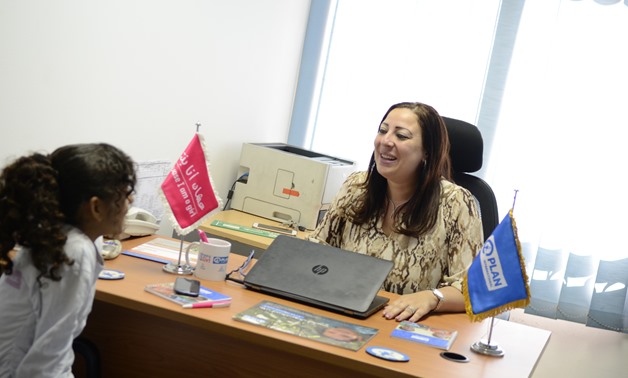 CAIRO - 6 December 2017: Many inspirational Egyptian women have overcome all barriers, from gender, age, race and nationality, to land the highest positions in some of the most influential global institutions for development. Each is playing a vital role in the international arena, whether socially, culturally or economically—and they are all worthy role models for every Egyptian girl.

Jacinthe Rihan advocates an inclusive supportive environment for Egyptian women and children through her position as the program area manager for Greater Cairo and the Delta at Plan International Egypt. Plan Egypt has been active locally since 1981, working with over 40,000 Egyptian and refugee children since then, and is the national branch of Plan, a global organization that is active in over 70 countries, advocating the rights of children and equality for girls.

Capitalizing on the “supremacy” of being a female, who better understands women needs, rights, challenges and barriers, Rihan has dedicated her life to promote community development and support the most marginalized groups in our community, especially women.

Through her work with Plan, Rihan is tasked to lead people and influence decision-makers to help create an interdependent Egyptian society, characterized by equal economic, social, political rights and opportunities realizing social inclusion.

“This type of work requires selfless individuals who are passionate about assisting others,” Rihan explains.

For the past 16 years, Rihan’s life has revolved around academic and development field experiences, always interested in altering the lives of those around her. She has worked hard to acquire in-depth knowledge in right-based programming, civil society organizations, and women’s development issues, as well as practicing social and economic inclusion approaches to less advantaged groups. “As an Egyptian development practitioner, I have the opportunity to support people and communities to achieve social change and improve the quality of life in their societies,” Rihan says.

Despite challenges, Rihan sees that being a female has actually had a positive influence on her career path, giving her strong motivation to prove that women can try their best and find themselves.

“I had to learn and grab opportunities to empower myself and support the creation of an environment for women where they can make their own decisions, for their personal benefits as well as for the society,” Rihan says, stressing how important it is for Egyptian women to secure a place in international organizations as a “first step to bridge between Egyptian and external actors in the development sector . . . Working in development also provides women a chance to work equally alongside their male counterparts, which in turn helps to alter the perception of a woman’s capabilities within society—and dispels the notion that a woman should remain at home,” Rihan adds.

A strong advocate of women’s empowerment and gender equality, Rihan believes that “no matter how deeply entrenched attitudes toward women in Egypt are, they can be overcome by the continued efforts of different international organizations that can facilitate changing the prospects of future generations of women.”

She also points out that men have a critical role in being engaged and supportive of women’s success, noting how family and husband’s support and understanding of the importance of the wife’s work in and outside the house are essential. “I believe that women can lead and can make a positive difference, it’s vital that every woman is given the chance to fulfill her potential; no matter where she lives,” Rihan says.

“My advice to Egyptian women is to take their time to explore their potential and interests to be able to enjoy a happy productive career. There is an excellent climate for supporting women in Egypt, especially by identifying 2017 as the year of women.”—Jacinthe Rihan

This article is part of Egypt Today’s campaign “Break the Silence ... Say No to Violence” marking the 16-Day campaign of activism against gender-based violence GBV from November 25 to December 10. In a series of articles we document the journey of inspirational women who made it to the top in the world of development and NGOs including, Rania Al-Mashat, International Monetary Fund (IMF) advisor, Shaden Khallaf, senior policy advisor for the Middle East and North Africa Bureau at the UNHCR (United Nations High Commissioner for Refugees), Azza Karam, UNFPA (United Nations Population Fund) senior advisor and Jacinthe Rihan, Program Area Manager for Greater Cairo and Delta at Plan International Egypt. The four women