By: Fatima Al-Wahaidy
CAIRO – 1 December 2017: Fighting gender based violence and discrimination can take many forms, including highlighting and documenting female role models who challenged stereotypical gender roles. Doing this normalizes women’s presence in sectors recognized as “male only fields” and betters perceptions of successful female entrepreneurs.

Despite the ongoing and vital contributions of women to human history, their participation and efforts are often overlooked. This has led to the belief that the spotlight should be placed on talented, leading and innovative girls and women who proved, and are still proving every day, that their role goes beyond the enshrined traditional roles, and that they can take over male dominated fields.

The more that women are seen in leading positions, the more it is normalized, increasing the possibility of girls and women to peruse the future they draw for themselves. Moreover, there is a strong, positive correlation between women who can see strong women role models around them and women that have leadership goals; their chances of achieving those goals also increase accordingly.

Presenting and documenting the journey of these talented women and their achievements inspires girls and women to believe they can be whatever they want, allowing us to have a stronger economy and better developmental prospects.

Throughout Egypt’s rich history, women played an active role in building the country, contributing to its development. Egypt Today is launching an a series of articles to celebrate and present women role models to help positively impact the perception of female leadership and female professionals. This article – the first article – presents examples of inspiring women who have reached high level positions. The following articles will present models from younger generations who are building their future and thriving despite the odds. 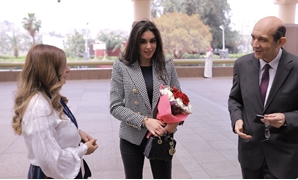