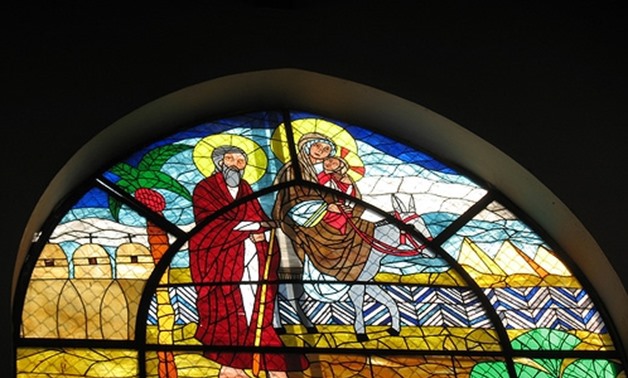 CAIRO – 10 November 2017: The ancient Virgin Mary Church in Maadi is believed to be the Holy Family’s point of departure to Upper Egypt. Our driver took the Nile Corniche Road, and we watched the old river that endured time, the rise and fall of civilizations. On its bank, a magnificent church was built to immortalize Virgin Mary’s visit.

We stopped in front of the church, and we told an inquiring policeman that we had an appointment at the church. We went through the metal detector and security guards verified our identities and allowed us in. Edward Wadie, a church deacon, led our tour in the big, historical church.

When he met us, he had just removed his gold-embroidered dalmatic that he wears at the morning mass as he always does on Fridays and Sundays. The church used to be called the al-Adaweya Virgin Mary Monastery, but then became a church when Maadi developed, which made a monastic life of solitude difficult.

“The Holy Family stayed at our church for three to four days on their way to Upper Egypt,” Wadie said.

The church’s ancient sanctuary was a wooden structure adorned with crosses, but with also tiny windows on it. Wadie explained that monks in the past monitored the area outside through those tiny windows to spot any imminent Berber, in which case they would escape with the Blessed Sacrament (Christ’s body) and his blood (the wine). Berber attacks on monasteries occurred in the fifth and sixth centuries and monasteries were plundered of food, crops and other possessions.

Next to the church’s sanctuary, there was an icon of the Virgin Mary, where golden earrings, a golden necklace and a cross dangled from her image. The base of the icon was filled with gold, too. Wadie said lovers of Virgin Mary gave away this gold when she answered their prayers. He said there is always more gold coming in, as the Virgin Mary “never turns down someone’s prayers.”

There are many amazing stories about that church, but Wadie told us probably the best one. He said a floating Bible was found in the river next to the church on March 12, 1976. Samaan, a worker in the church, found it, so he called Reverend Bishara Ibrahim, the church’s priest who was conducting mass.

The reverend and deacons found the Bible amid the waves of the Nile, but it stayed open, displaying the verse, “Blessed be Egypt my people,” though the Law of Buoyancy says paper would sink and not float. The church has been preserving this Bible in a transparent glass box to this today.

The Nile from a tiny window in Maadi church – Memphis tours

There is another sanctuary located in the nave of the church, with a dome hoisted on wooden pillars. In front of it, there are the church’s wooden benches and beneath it there is a metal door which connects you to the stairs that the Holy Family used to reach the Nile and take a boat to Upper Egypt. The church’s priests pray in this sacred area constantly.

Inside Maadi church – Memphis tours
To our right, there was an entire family who came to be blessed by the holy shrine. The family members started to reach the Virgin’s shrine and once they got there, they immediately started to pray. The bodies of saints in their metal tubes surrounded the whole shrine, and in the middle of it, you could see the Virgin’s icon, lit by candles.

The mother whispered something to the Virgin’s icon, as if she was telling her a secret. Next to her, the father was lighting a candle for the Virgin, while their son was calling on them to glorify the Virgin. They all stood solemnly, and others joined them and started to chant, “Bless you Mary, a flower in the garden. Bless you Mary, bride of the holy Light.” Then, they chanted a Coptic prayer and left the shrine to continue praying in the church.

Before we left the church, we saw a small sailboat sailed by a lady and her young son. She was not going to Upper Egypt like the Virgin, but came from the other bank to earn a living near the luxurious Maadi corniche. We were then getting ready to continue our journey southwards to El-Minya, but we did not consider sailing down the Nile, at the time filled with crocodiles, as the Holy Family did.