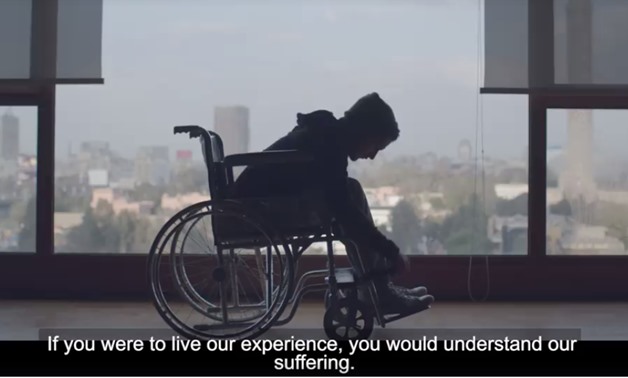 The campaign invites social media users to interact with a video, directed by Amr Salama, and each interaction generates donations for installing ramps and tactile blocks on sidewalks for the visually impaired, renovating Faisal and Cairo University metro stations and building a bus station around Cairo University.

In a prior interview with Egypt Today, manager and co-founder of Helm Foundation Ramez Maher stated that the objective is to turn Cairo University into a model of a fully accessible area in Egypt. “Our role as an institution is to introduce the governorate to the means and tools of establishing an accessible route, so that they can replicate it,” Maher stated.

The campaign video features Shalaby as a visually impaired woman and Malek in a wheelchair. Both are challenged to get around in the streets due to lack of accessibility.

Helm had signed a protocol with Giza governorate in 2016 to implement the first accessible street in Egypt, which also targeted the surroundings of Cairo University. “We chose Cairo University because there are almost 1,000 staff and students with disabilities,” Maher stated. The projects apply international models, including special tiles for warnings and guidance, as well as adequately designed ramps.

The first initiative targeted one kilometer around the university, and the current campaign aims at further expansion in the area. Helm is also collaborating with Luxor governorate and the Ministry of Antiquities to expand the project and make Egypt accessible for all tourists, Maher revealed.

First launched in 2014 as an initiative to facilitate the employment of people with disabilities, Helm Foundation has quickly expanded, providing trainings for business companies to accommodate them and guarantee their full inclusion, working with the government to provide accessible streets, and soon launching the first mobile application in the Middle East, where you can find the nearest accessible facilities, barber shops, restaurants, mosques, etc. and know exactly which barriers you would find there.

We had the chance to visit the foundation headquarters last month and talk to some of Helm’s inspiring ambassadors:

Armored with a strong vision and deep beliefs that disability is never the problem of a person, but rather the barriers that the society and other people put in their way are, “Helm” (Dream) Foundation has adopted a mission to promote the full inclusion of persons with disabilities in all aspects of life in Egyptian society.