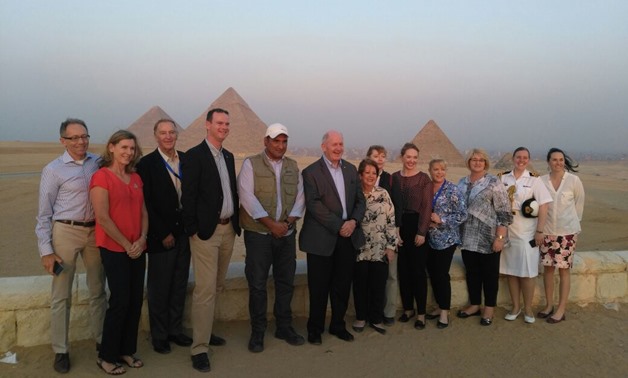 CAIRO - 23 October 2017: Peter Cosgrove and his spouse passionately headed to visit the Pyramids of Giza after an official visit to Egypt on Saturday.

The great Giza pyramids still rank atop of the world’s most visited seven wonders. They still keep on dazzling visitors and stand as the magnet that pulls viewers from different spots worldwide. The destination of tourists irrespective of the long distance they fly or the hectic trips they endure to arrive to Egypt.

Giza Pyramids have warmly received Cosgrove; the current Governor-General of Australia, and his spouse on Saturday. Heading to Egypt to mainly meet a number of Egyptian officials in his first visit since he ran in office, Cosgrove did not miss the opportunity of visiting the pyramids in Giza. Despite his tight schedule slated to discuss the bilateral Egyptian Affairs, Cosgrove was eager to enjoy a memorable experience when visiting the lands of the Pharaohs.

According to Ashraf Mohyi, Cosgrove has shown great interest in visiting sphinx. He was inquisitive and passionate about knowing how and why the pyramids were built and the number of workers who contributed in this huge immortal icon.

Excited as he was, Cosgrove was keen on taking pictures in every spot he visited;
namely, the pyramids, the panoramic area and sphinx. The Governor-General of Australia and his spouse expressed their passion for Ancient Egyptian civilization and historic attractions.

Giza pyramids have always been the world celebrities and the VIP main destination.

Earlier this month, the Hollywood star, founder and CEO of WPDI, and UNESCO Special Envoy for Peace, Forest Whitaker posted on his official Facebook account photos of him paying a visit to the Giza Pyramids in Egypt. “Such an inspiring moment today at the pyramids in Cairo #Egypt,” posted Whitaker, describing his visit.