7 historical cafés in Cairo that are proud of their stories 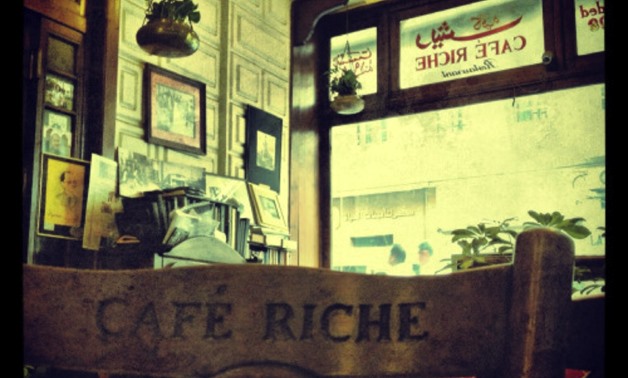 CAIRO – 7 October 2017: Historical cafés in Cairo have stories of their own and are often used as venues to freely discuss cultural and political issues, much like they were used in the past.

In Egypt there are a lot of cultural cafés; some disappeared, while others have managed to maintain their original state. Below are seven cafés in Cairo that still carry their historical essence.

1 - Ali Baba café
The café was initially a bar owned by a Greek woman. An Egyptian bought it in 1968 and tunred it into a café that flourished in the 1970s and was attended by renowned intellectuals, including Naguib Mahfouz. Now, the first floor of the place is a restaurant, and the café lies on the second floor with a special corner overlooking Tahrir Square named after Mahfouz, where he used to sit.

2 - Ritz Café
This café witnessed many of the cultural meetings and discussions between a number of well-known writers and poets like Abbas al-Aqqad, Tawfik al-Hakeem and Mahmoud Sami al-Baroudy.

It is located in Kasr El Aini Street in front of Al-Ahli Bank.

The café has maintained its original state and location to this day.

4 - Café Riche
Riche café is a French-style café located in downtown Cairo. It attracted many activities though several political shifts, poets, and writers such as Naguib Mahfouz and Taha Hussein. It was owned different expats in Cairo since the beginning of the 20th century, and a French owner of the place, Pierre-Henry Ressigné, named it after another famous café in Paris. It was bought by Egyptian Mikhail Abdel Malak in 1960.

This café was built on the remains of the historic Egyptian officer Ahmed Ourabi, who led a mutiny in 1879 against the Anglo-French loyal Khedive Tewfik.

6 - Souk al-Hamidiya
When Egypt and Syrian were united in one state from 1958 until 1961, a Syrian in Egypt founded the café on Falaki Street in downtown and named it after one of the most famous markets in Syria.

Some of the most famous people who used to sit at the café were poet Amal Donkol, author Abdel Wahab Mutawe and the critic Farouk Abdel Qader, who held his seminars there every Sunday until he died in 2010.

7 - Orabi Café
Kamel Orabi, after whom the café in el-Geish Square is named, was a major “tough guy” in the Husainiya district in Cairo at the beginning of the 19th century. It gained its fame from the renowned writer Naguib Mahfouz, a Nobel laureate in literature, as he used to meet his old friends there, including renowned Egyptian actor Ahmed Mazhar.

8 - Al-Bosta Café
It is also called Mattatia Café, named after to the Italian engineer who designed some of the buildings around it. It is located between al-Mousky and al-Ataba districts.

Al-Bosta café was the starting point of the 1919 revolution, as it witnessed all the pre-revolution meetings organized by political activists like Saad Zaghloul.