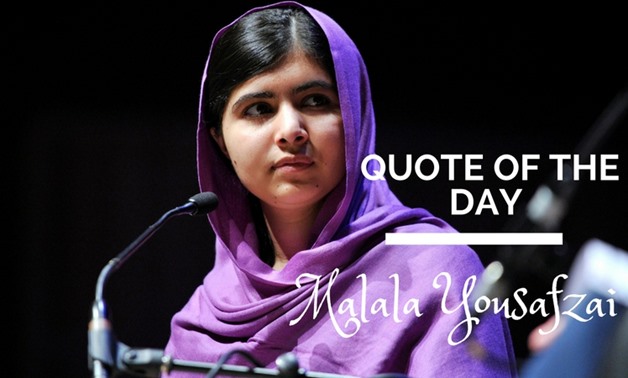 Cairo – 05 October 2017: “Let us remember: One book, one pen, one child, and one teacher can change the world.” - Malala Yousafzai

Malala Yousafzai is Pakistani education activist and youngest ever Nobel Prize winner.
Born in 1997, the young Pakistani girl who inspires all girls around the world by her courage and passion to girls’ education. She attended a school founded by her father following Taliban began attacking girl’s schools in Pakistan. In 2008, Malala gave a speech titled “How dare the Taliban take away my basic right to education?”

In early 2009, Malala started blogging for the BBC, using the name Gul Makai, about girls’ life under the Taliban's including threats to deny girls from education. Later on that year her identity was revealed.

In 2011, she was nominated for the International Children's Peace Prize and she was awarded Pakistan's National Youth Peace Prize for her growing public activism about her right and the right of all girls and women to education.

This activism almost cost Malala her life. In 2012, she was shot in the head by a Taliban gunman who wanted to shut all progressive voices in Pakistan, even if they were calling for a basic human right like the right to education. Unfortunately, the Taliban still consider Malala a target.

Following the shooting, Malala was in critical condition, a portion of her skull was removed to treat her swelling brain and she was transferred to the UK for further care. Later in 2013, she continued her education at a school in Birmingham, UK.

In 2013, Malala turned 16. During this year, she gave a speech at the UN and she also wrote an autobiography titled ‘I Am Malala: The Girl Who Stood Up for Education and Was Shot by the Taliban.’


Malala was also awarded the European Parliament Sakharov Prize for Freedom of Thought in the same year in acknowledgement of her work.

In 2014 she won the Nobel Peace Prize, becoming the youngest person to receive the Prize.

July 12 became recognized as Malala Day. In 2015, for her 18th birthday she opened a school for Syrian refugee girls in Lebanon, all related expenses were covered by the Malala Fund. The school was designed to admit nearly 200 girls from the ages of 14 to 18. "Today on my first day as an adult, on behalf of the world's children, I demand of leaders we must invest in books instead of bullets," said Malala in one of the school's classrooms.

On the same day Malala asked her supporters to post a photo holding their favorite book and launched hashtag #BooksNotBullets where people explained why they choose books over weapons in a message to world leaders to fund the “real weapon for change, education.” Malala said on the hashtag: “The shocking truth is that world leaders have the money to fully fund primary AND secondary education around the world - but they are choosing to spend it on other things, like their military budgets. In fact, if the whole world stopped spending money on the military for just 8 days, we could have the $39 billion still needed to provide 12 years of free, quality education to every child on the planet.”

In 2015, director, Davis Guggnheim, released a documentary about Malala titled ‘HE NAMED ME MALALA’. The film gives an overview of Malala’s life, her family and her activism to support girls’ education around the world.

In April 2017, UN-SG, Antonio Guterres, appointed Malala as a UN Messenger of Peace to promote girls education. The appointment is the highest honor given by the UN for an initial period of 2 years. On the same month, she was also given honorary Canadian citizenship.

Yousafzai, announced on her official Twitter account that she was accepted to study Philosophy, Politics and Economics at Oxford University.
Malala shared a screenshot of her acceptance and commented “so excited to go to Oxford!! Well done to all A-level students – the hardest year. Best wishes for life ahead!"

So excited to go to Oxford!! Well done to all A-level students - the hardest year. Best wishes for life ahead! pic.twitter.com/miIwK6fNSf

Malala survived, she defeated terrorism and never stopped advocating for the importance of education.

For more information on Malala and her work follow @Malala #GirlPowerTrip Malala Fund.