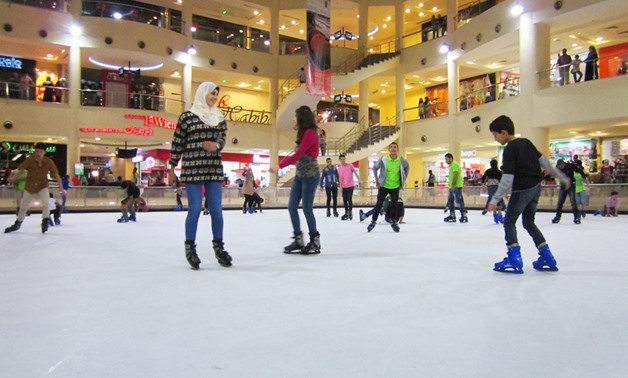 CAIRO- 25 September 2017: Cairo is a city that does not sleep; it is bustling with all kinds of activities. While you are unlikely to see any snow in the Egyptian capital, you can ice skate anytime there.

Below is a list of five ice skating locations in Cairo and Sharm El-Sheikh, as compiled by Best Place Egypt’s Facebook page:

If 6 October is far from where you live, you can head to Genena Mall in Nasr City. Half an hour on the ice costs LE 15, and for LE 30 you get 40 minutes.

Sun City Mall on the Autostrad highway of the Sheraton district hosts Fun Kingdom, which gives you 20 minutes of skating for LE 60.

Maadi has long provided ice skating for its residents at Family Land, located behind Othman Buildings, and half an hour costs LE 40.

Even in Sharm El-Sheikh, with all the beaches, sunny weather, and water sports, you can ice skate in Ice Skating Soho Square for 20 minutes for LE 50.
6- Sky Egypt Mall of Egypt

you are allowed to go to snow park with snow Go Ticket of 300 L.E ( 17$)
You can go for North Pole experience for 480L.E (20$)
if you are professional at skating so you can enjoy two hours skating for 200L.E (16$) , In case of companion children you have to pay for each 150L.E ( 15$) for two hours skating
If you aren’t professional at skating Sky Egypt will provide you with skating lesson there for 925 L.E (25$)
As the temperature inside sky Egypt is under Zero degree , you aren’t allowed to enter with your ordinary clothes you have to wear a special outfit suitable for the weather inside so you can buy :
Gloves for 70 l.E (10 $)
jacket with Gloves for 330 L.E (17.5$)
Noted That all games there is under rules and instructions according to the age and body length
children less than 3 years aren’t allowed to come .