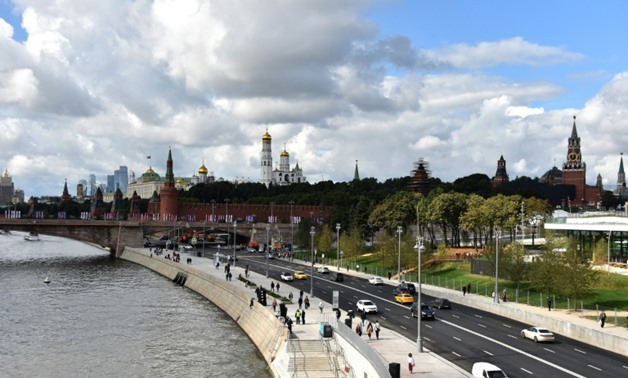 Zaradye Park is built on the site of a huge Soviet-era hotel on the banks of the Moscow river, which was demolished in 2006-AFP / Vasily MAXIMOV

12 September 2017:Moscow on Monday opens a brand new park to the public just steps from the Kremlin, boasting wonders such as an ice labyrinth, despite criticism over its huge pricetag.

Zaryadye Park has replaced a gigantic Soviet-era hotel on the banks of the Moscow river, which was demolished in 2006 leaving a lot that stood empty for many years as investors and City Hall clashed over the space, valued at more than $1 billion.

Spanning an area just over 10 hectares (25 acres) in prime location near Red Square and the Kremlin, the lot was eventually converted into a park because "nothing else worked," said Moscow culture department chief Alexander Kibovsky as he gave a tour to journalists at the weekend.

Initially, "nobody had the courage to suggest it could be a park... the lot was valued at 1.5 billion in foreign currency," he said.

"We were shocked" when Moscow mayor Sergei Sobyanin floated the idea. he said. "I don't know another metropolis where they would disregard commercial value and use the territory as a public space.

The park consists of a landscape with different geobotanical "zones" including one resembling a tundra, as well as attractions like a philharmonic hall concealed under a hill with a "glass crust" roof and an ice cave with a labyrinth.

"Since we (Russia) have a lot of territory beyond the Arctic circle, we are showing it here," Kibovsky said.

Park director Pavel Trekhleb pointed out that climate control for the park's southern plants will be provided with infrared lanterns, while fish will be supplied into the pond on a weekly basis.

"You can come with a fishing pole and get fish for dinner," he said

Zaryadye Park is one element of the current mayor's push to remake Moscow which has turned the city of some 12 million into a vast construction site over the past few years.

Other initiatives include a $62.1 billion plan to raze thousands of Soviet-era pre-fab apartment blocks, the $2 billion effort to revamp Moscow's central streets and the $3.5 billion new train line connecting some outlying neighbourhoods.

Compared with these expenditures, the park's budget of 14 billion rubles ($244 million) seems modest, but critics have called some of its pricey elements frivolous at a time when the country is trying to recover from recession.

"What a scale! That's two annual budgets of Tver (a city north of Moscow) on one park!" one Facebook user Alexey Nikonov wrote of Zaryadye's cost.

"No money in the budget to pay salaries to doctors, pensions in the provinces are miniscule, while Moscow is behaving like a fat cat," wrote another critic Svetlana Popova on Facebook.

Historically Zaryadye was a bustling merchant quarters and became a mainly Jewish neighbourhood in the late 19th century.

However after Jews were forcibly moved out of the Russian capital in 1892, Zaryadye began to disintegrate and Soviet authorities decided to knock it down.

It was replaced by the Rossiya hotel which was the biggest in the world with 3,182 rooms when it was built in 1967.