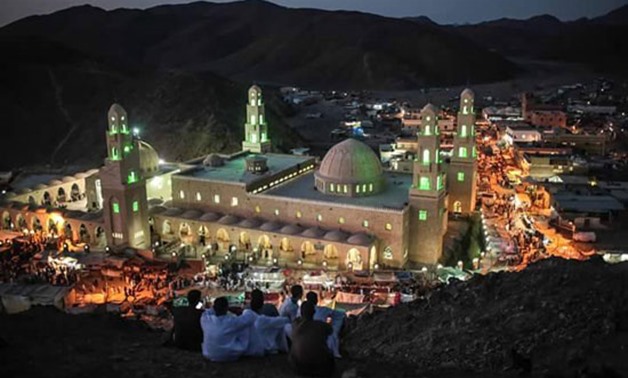 CAIRO - 29 August 2017: In an ambiance of joy and celebration, Sufism followers have celebrated the birth of the mystical Sufi Abu al-Hassan al-Shazly, in the Valley of Humaithera , 110 kilometers west of the city of Marsa Alam, where his body was laid to rest.

Abu al-Hassan al-Shazly (1196 AD - 1258 AD) was born to a rich family in Morocco, and as a young man he was known for his ability to engage in arguments with the religions scholars of his time. He studied in Fes, Morocco, then moved to Alexandria, Egypt, in 1244 AD, and later to Iraq and back to Morocco where he met his mentor Sheikh Abdel Salam Ibn Mashish. Finally, he died in the Valley of Humaithera, Egypt, on his way to pilgrimage in the city of Mecca in 1258.

Abu al-Hassan al-Shazly shrine is usually visited by thousands of people to celebrate his birth, though this year it seemed that the number dropped immensely to around twenty individuals. Representing different Sufi groups, they gathered around the shrine and raised their hands to God saying their “Ibtehalat” or the Sufi prayers according to the group they belong to.

A number of followers from various Egyptian governorates arrived at Humaithera for the celebration and set up their tents in a remote location set by Marsa Alam City Council.

The Valley of Humaithera where the body of Abu El-Hassan Al-Shazly resides is on the highest peak in the region, ranging between 200 to 300 meters high and located directly opposite the Shazly Mosque. One of the most famous habits of the visitors every year is that the day before Eid al-Adha Muslims’ feast, that’s known to be ‘the Day of Arafa’ they stay on Mount Humaithera until sunset.