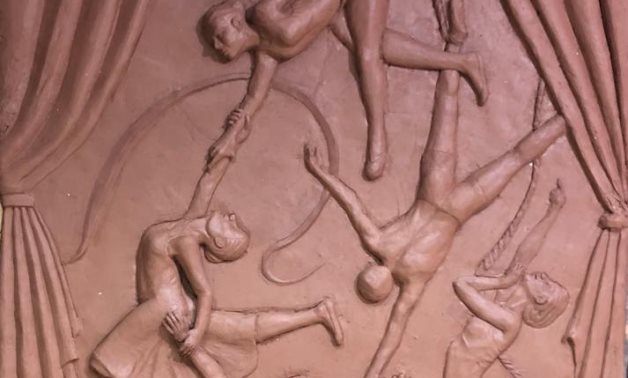 The three female artists have directed their graduation projects to educate the community about the importance of psychological and social support, each in their own art creation.

Sahar Azmy’s piece titled “Lifeline” and it represents three characters who together represent the life collar, including troubled persons and rescuers.

She explained that she tried to show the elements of harmony, unity and interdependence through the position of these people until the unity relationship between all the characters of the work becomes clear, starting from the personality of the savior and the people helping him to complete the rescue process and between the personality of the depressed person.

Titled “I lost… then,” the art piece by Artist Heba Sherif portrayed the effect of the feel of loss on the person, describing through the pain and agony the person feels when he loses a beloved one.

Sherif’s sculptural project succeeds to express the experience a person with broken heart for losing someone close to him, especially as he explained “the person himself sometimes could not explain what he is going through.”

Sherif embodied through her work images of feeling of loss in a physical and expressive movement, and with loss she means losing someone close, losing passion, losing freedom, losing his dream, himself or his past.

She added that some of us may enter into a psychological state of indifference, not feeling or care about anything, as a result of the many shocks and problems he has been exposed to in his life, and sometimes he may feel despair and frustration.

Artist Farah Mohamed has succeeded in gaining great praise from her professors at college for her creativity and excellence in embodying reality, crises, conflicts in a sculptural project titled “Life pressures.”

Farah Mohamed decided that her project should discuss a real topic that touches people and tackles a psychological aspect, and struggles people face in life due to the pressures.

“All of us have problems and psychological pressures, and have gone through a crisis in his life that prompted feelings of fear, anxiety, sadness, pain or oppression,” she said.

She added that the project is based on the principle of expression, that is, how to translate and embody feeling that are sometimes hidden, and express the pain and sorrows of human beings as a result of the pressures of life.