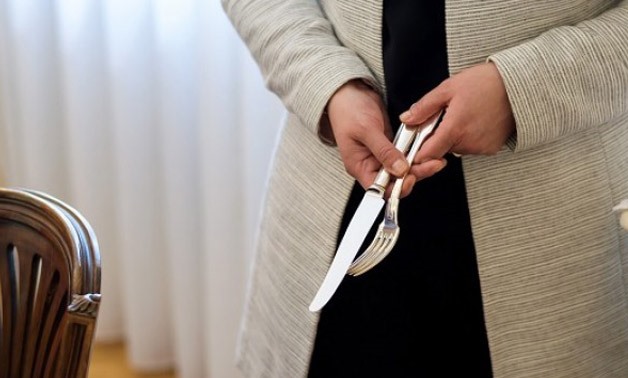 A teacher holds a knife and a fork during a lesson at Switzerland's finishing school Institut Villa Pierrefeu on June 26, 2017 in Glion. PHOTO: AFP

But as one of the servers steps forward holding a silver soup tureen with white-gloved hands, an instructor helps her adjust the angle of the bowl to make sure the ladle is facing the diner.

And a second tutor whispers in the ear of another diner to lower her elbow as she brings the spoon to her mouth.

The women are not at a fancy restaurant or a high-end social club, but at Switzerland's last finishing school, learning to master good manners, strict etiquette and how to avoid a fatal faux pas.

"I realise now that I have been mixing the French style of eating with the British style," said Institut Villa Pierrefeu student Heba, asking that her last name not be given.

With some embarrassment, the 34-year-old Egyptian national explained that she had placed her knife on her plate even though she had not used it during her meal -- a no-no in French dining etiquette.

The students are a diverse crowd, according to Viviane Neri, who took the reins of the school in 1972 -- nearly two decades after her mother founded it.

"Obviously we have daughters of presidents and princesses, but those are definitely not the majority," she said, her warm smile offsetting the strictness of her impeccable attire.
"We also have people who save money to finance their stay because... they realise that this will give them extra knowledge that very few people have," she said.

The current students, aged between 18 and 50 and ranging from professional businesswomen, to doctors and housewives, do not reveal their last names to each other to ensure equal treatment.

Half a century ago, the students at Institut Villa Pierrefeu, which overlooks the picturesque town of Montreux, were among thousands attending a plethora of finishing schools dotting the hills around Lake Geneva.

Back then it was common for girls and young women from wealthy, upper-class families to attend so-called "charm schools" to polish their manners and social graces.

Britain's late Princess Diana was among the famous alumni of since shuttered finishing schools in this area.

But today, Pierrefeu is the only one left, after the industry was decimated by the 1968 student revolution and rise of feminism.

"There was a huge dip in attendance right after the student revolution," Neri said, adding that "the few who came said they were going to a languages school. They were ashamed."

Neri attributes her school's longevity to its broad international focus and its rigorous efforts to keep the course material, including textbooks available only to Pierrefeu students, constantly up-to-date.

The students learn and practise the proper etiquette and protocol of 20 different countries, as well as cultural taboos to be avoided.

"Cultural differences you are not aware of can create conflicts for very silly reasons," Neri said, pointing out for instance that in Japan it is rude to blow your nose in public, while in Germany it is rude not to.

She suggested that many journalists could use a Pierrefeu course to avoid "embarrassing" articles like those criticising US First Lady Melania Trump for not covering her head during a recent trip to Saudi Arabia.

"She doesn't have to because it is not compulsory for non-Muslims who come to Saudi Arabia. That's protocol," she said.

The students seem to enjoy delving into such details, although some expressed surprise at the intensity of the course.

"I don't know if, when you hear finishing school, you take it as seriously as I think we all do now," said Taylor, a 34-year-old American student, who also refrained from giving her last name.

"It is very rigorous,... very comprehensive," she said, adding that she felt she was "becoming educated here in a very rounded way."

Unlike the post-1968 generation, she and others said they proudly boasted of attending the school.

Former student Nadine Abou Zahr, 46, said she had been sceptical when she first heard about the school while attending university nearby two decades ago.

But the French-Lebanese former fashion magazine editor, who declined to reveal her current occupation, told AFP in an email that she could not be more delighted with her experience.

"Learning good manners in my opinion is not about snobbism or superficiality. It's about respect, for yourself and others," she said.

The course is not about creating "dramatic" career or life changes, she said, but, rather, designed to broaden cultural horizons and teach the importance of paying attention to detail.


Neri said she had noted a clear shift in attitudes towards the need for good manners.
"I think people, after two generations of no etiquette, realise that it is so much easier when people share the same codes," she said.

The shift has led Neri, along with her son and would-be successor, Philippe, to explore a range of expansion options.

Three years ago they opened shorter seminars to men. They are also looking into reinstating a full school year and online courses.

At the same time, Neri is working to clear up common misunderstandings about what finishing schools actually represent.

Far from seeing girls walking gingerly with books balanced on their heads, or being focused on how to find a husband, her finishing school provides for in-depth learning and opening-up of the mind, she said.

"I always say we don't finish them (the students), we start them," Neri said.
"We open their eyes to the diversity there is."