In pics: Best diving spots when in Marsa Alam 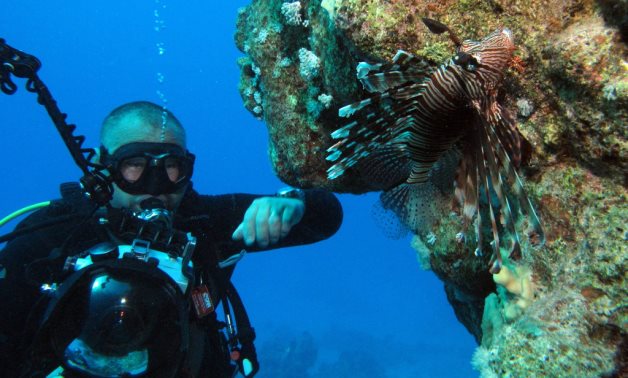 CAIRO – 13 April 2022: The Red Sea Governorate is famous for several natural marinas, especially in the south of the Red Sea.

Among these natural marinas is the “Tanbah Marina” in which the Dojong, the mermaid of the sea, appears frequently. Due to its rarity, the mermaid is one of the most attractive sea creatures for tourism in the Red Sea.

'Elphinstone Reef' is also among the most famous diving spots in Marsa Alam. Other sites include: The Brothers Islands, Daedalus Reef, Dolphin House (Sha'ab Samadai), Abu Dabbab and Hamada Wreck. Diving enthusiasts like to visit most famous diving sites in Marsa Alam, including:

- Visitors to the Red Sea Governorate, especially those to Marsa Alam, described Marsa Tandaba as a region of magic and nature.

- It is considered one of the most beautiful marinas in the south, and has about 13 diving sites near it, which made it a starting point for all diving trips to those famous sites.

- Check Point dive site, Marsa Gamal, Tarfa Makki, Erg Tarfa, House Reef, and Al Mawaseer are located nearby, as they are among the famous diving sites in Marsa Alam.

- It includes small camps built by local residents to provide drinks and local food to tourists.

Red Sea also has other diving sites, including: - It is located south of the Red Sea, specifically near the beaches connecting the city of Quseir and Marsa Alam.
- Diving in the depths of Elphinstone is for professionals only, and amateurs must dive accompanied by a certified diver.
- It is called an adventure trip because there are more than 14 species of sharks.

- The reefs of Brothers and Elphinstone are known as the Shark House due to its large perimeter, and its stunning diving experience.

- The Red Sea includes more than 60 diving sites known to fans of diving in this area. The Red Sea attracts thousands of tourists every month to see various marine creatures, on top of those sites and the most dangerous is the "Shark House".