Acquaint yourself with Tutankhamun’s multi-layered sarcophagi 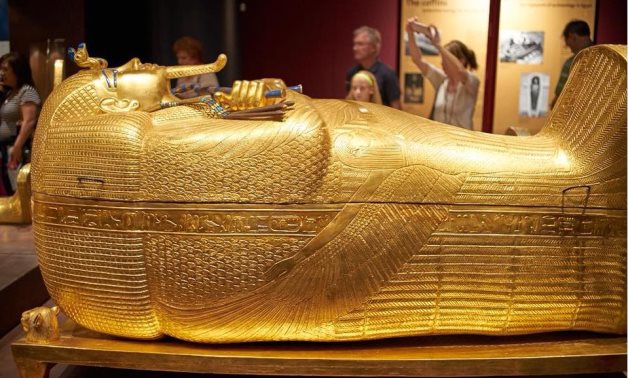 CAIRO – 3 January 2020: Tutankhamun, or the “Golden Pharaoh” as he is known internationally, was one of the kings of the Eighteenth Dynasty of the New Kingdom.

He became one of the most famous pharaohs, because his tomb and complete treasures were discovered the same way they were initially buried, and also because of his death in the prime of his youth, which is a mystery that raises the curiosity of many.

Tutankhamun was buried in his famous tomb “Cemetery 62” in Egypt’s Valley of the Kings. It was discovered on November 4, 1922 by British archaeologist Howard Carter.

This discovery caused widespread media fuss throughout the world. Two years after the tomb was discovered, specifically on this day, January 3, 1924, Carter found the pharaoh's coffin.

Did Carter discover only one coffin belonging to the Golden King?

The dimensions of the king's burial chamber is approximately 6m x 4m. It contains the original rectangular coffin made of quartzite stone. Its corners are decorated with four garrison deities spreading their wings to protect the coffin and everything in it.

This sarcophagus contained inside it three coffins that took the form of a king in the Osiris position.

A pure gold coffin (weighing 110,4 kg) in the form of a mummy. It was found in the middle coffin. It was wrapped in linen that covered the entire coffin except for the face. It is now housed in the Egyptian Museum in Tahrir.

Upon opening the coffin, the young king's famous golden mask appeared around the head of the mummy.

This coffin was found inside the outer gold-gilded coffin. It is made of wood covered with sheets of gold. It was covered in bits of polychrome glass pastes. This coffin is currently housed in the Egyptian Museum in Tahrir.

The sarcophagus is made of gilded wood and represents the king as the deity Osiris. The hands are covered with gold foil and crossed on the chest holding the royal badges inlaid with blue and red glass paste. The coffin has silver handles that were used to move the lid.

After examining the external gilded sarcophagus very carefully in the cemetery in the Valley of the Kings, it was found that there is severe weakness, cracks and falling in the layers of gilded plaster, especially in the cover and the base, which requires quick intervention to conduct restoration operations in an appropriate environment.

Therefore, after coordination with the Tourism and Antiquities Police, and after the coffin was wrapped by restoration specialists from the Ministry of Antiquities, and after being assured of securing its safety during the transport process, and using anti-vibration units during transportation, it was transferred to the Grand Egyptian Museum.

Upon arrival, the coffin was preserved in the isolation hall of the Grand Egyptian Museum on July 14, 2019 for a period of seven days.

The stage of sterilization of the coffin began on July 22, 2019 to complete the plan for restoration, which also includes conducting some checks and analyzes (not destroying the trace material).

In light of the results of these checks, mechanical cleaning and wet cleaning are performed.

Then the deciduous layers will be re-installed in their proper places, followed by the comprehensive strengthening of the coffin. The restoration work is expected to take about eight months.