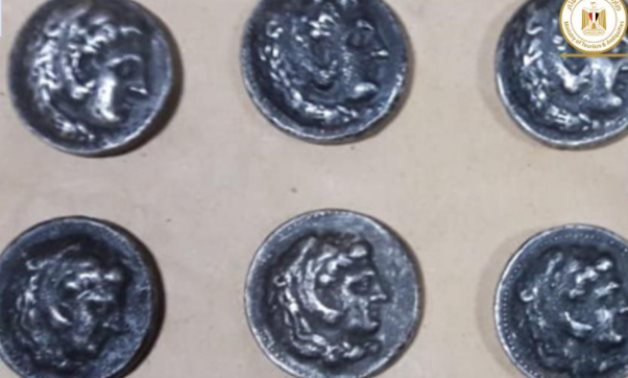 Some of the seized coins - Photo via Egypt's Min. of Tourism & Antiquities

CAIRO - 26 November 2020: The archaeological unit of Rafah Land Port, in cooperation with customs authorities, succeeded in seizing 9 coins while they were about to be smuggled out of the country.

Hamdy Hammam, head of the central administration for archaeological units of Egyptian ports, explained that after the archaeological unit in North Sinai received a notification from Rafah Customs Authority regarding suspicion of the authenticity of some coins in the possession of a traveler, a specialized archaeological committee was formed, headed by Ragab el-Husseiny, director general of the Center for Archeological Units in North Sinai. The committee confirmed the authenticity of these coins.
Necessary legal measures were taken and the coins were confiscated in favor of the Ministry of Tourism and Antiquities, in accordance with the Antiquities Protection Law No. 117 of 1983 and its amendments.
Al-Husseiny indicated that the seized coins are circular in shape and made of metal dating back to the Greco-Roman era from the reign of Alexander the Great.
One of the sides of the coins has the God Zues sitting on a throne carrying an eagle in one hand and a sceptre in the other.
There are also writings on the coins in latin. The other side of the coins has depicted Alexander the Great, wearing lion skin, likening Hercules.