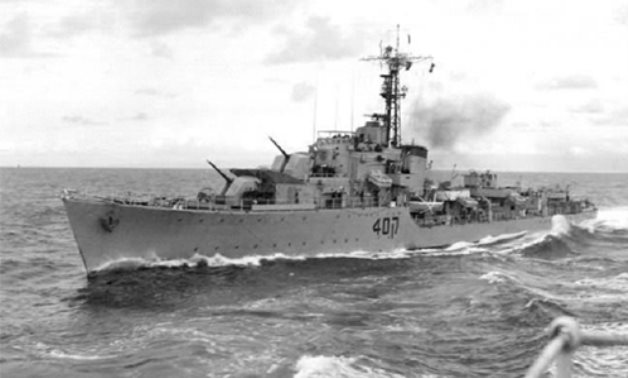 CAIRO – 21 October 2020: Just a few months after the June 1967 defeat, the Egyptian Navy rose up and dealt a painful blow to the army of the Israeli occupation, which was still under the delusion of being the strongest. After thorough preparations, the Egyptians sank the Israeli “destroyer”, Eilat, on October 21, 1967.

According to the book "The October War & the Coming Battle" by Ahmed Samir Abdel Hamid, the presence of the Israeli destroyer Eilat in the Egyptian territorial waters on the night of October 21, 1967, was a blatant challenge and a clear violation of the Egyptian sovereignty. It prompted the Egyptian Navy to exercise extreme restraint until directives were issued to the Naval Forces Command to destroy Eilat.

Immediately, the commander of the naval base in Port Said prepared a launch of the Soviet Kummer missiles. It is worth noting that the Soviet missile launcher is equipped with two surface-to-surface missiles of the "Styx" model, with a destroyer head that weighs a ton.

As soon as the commands of the naval forces were issued to destroy Eilat upon entering the territorial waters, two missiles came out from the Port Said base to carry out the mission.

The first missile hit the side of the destroyer directly, so it leaned on its side, and with the second missile, the Israeli destroyer Eilat sunk at a distance of 11 nautical miles northeast of Port Said at 5 p.m. on October 21, 1967.

The so-called destroyer sank inside the Egyptian territorial waters by about a nautical mile and the launch returned to the base to inflame the feelings of all the forces of the Canal Front and all the armed forces.