Nefertum, the god of healing, beauty & perfumes in ancient Egypt 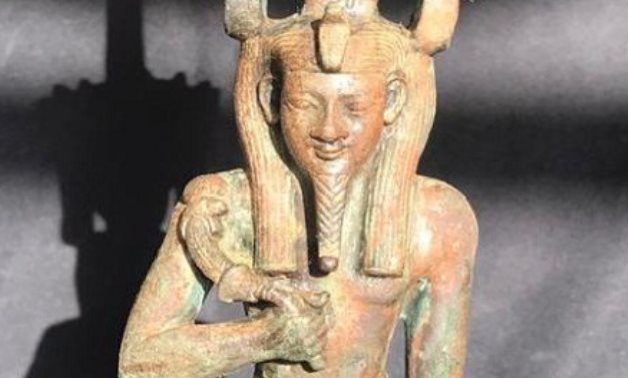 CAIRO – 20 October 2020: Archaeological researcher Ahmed Amer said that Nefertum was an ancient deity from the gods of Lower Egypt.

He was considered from an early age as the son of the god Ptah and Sekhmet in the Memphis trinity.

His name meant lotus. Then, he was depicted in the form of a boy decorating his head with a flower and two high feathers.

The statue of Nefertum, which was found next to the wooden coffins of Saqqara, represents the god of healing and beauty in the ancient Egyptian mythology.

Amer indicated that the god Nefertum was considered by the ancient Egyptians as a flower that sprang up and was emitted over the body of the god of the fields.

They also considered him as the flower that the god Ra holds and brings close to his nose. It is the custom that the Egyptians have always represented in their scenes in which they showed the nobles while they smelled flowers.

Perhaps this is the reason why Nefertum is known as the god of perfumes.

This has attributed to Nefertum an important role in the creation myths. The theory of Hermopolis depicted Nefertum as the child who rose from his lotus flower in the sacred sea and from his tears came the human race.

He also played a role in funerary thought, being a faithful assistant to the deceased in the afterlife.