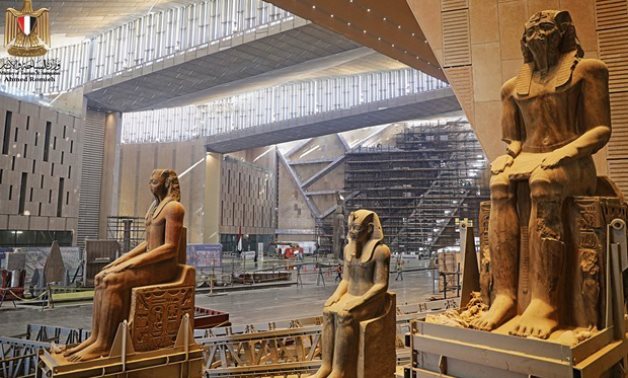 Grand Egyptian Museum to be 1st of its kind in history of museums - photo via Egypt's Min. of Tourism & Antiquities

CAIRO – 14 October 2020: The Egyptian state, represented by the Ministry of Tourism and Antiquities, is relentlessly working to complete the Grand Egyptian Museum project, set to open in 2021.

Egypt’s Minister of Tourism and Antiquities Khaled el-Anani recently visited the museum to follow up on the latest developments.

The completed construction works at the Grand Egyptian Museum reached 97 percent. The remaining percentage is covered by more than 80 Egyptian and foreign companies and consultants. The construction scaffolding will be lifted in the museum by the end of October.

The installation of 55 pieces on the Great Staircase has been completed; the staircase will house approximately 72 of the most important and largest Egyptian monuments of the kings of Egypt.

Hence, the whole area of 3750 acres will act like an open museum linked to a closed one, making the Grand Egyptian Museum the first museum of this size in the world.