Where will Saqqara's newly discovered coffins be displayed? 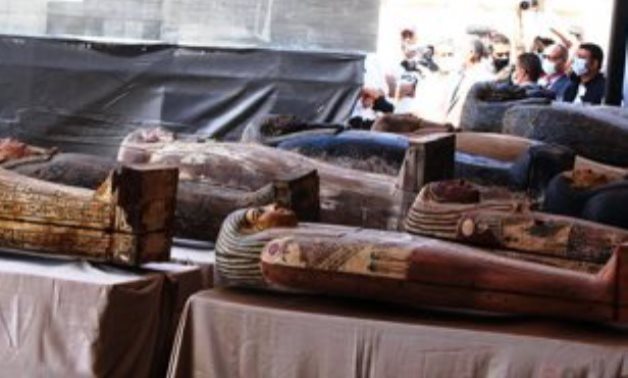 CAIRO – 5 October 2020: The recent archaeological discovery in Saqqara, which was announced by Egypt’s Ministry of Tourism and Antiquities in the presence of 60 ambassadors, caught international media outlets' attention.

It is considered the largest archaeological discovery in 2020 due to the huge number of coffins that were discovered intact for more than 2,600 years. Fifty nine coffins have been unearthed, with more expected to be uncovered soon.

But where will these coffins be displayed?

Egypt’s Minister of Tourism & Antiquities Khaled el-Anani said that the coffins discovered in the Saqqara antiquities area will be transported to the restoration center of the Grand Egyptian Museum, in preparation for displaying them in the museum once it is officially inaugurated.

Secretary-General of the Supreme Council of Antiquities Mostafa Waziri confirmed that the archaeological discovery in Saqqara has not ended yet. Excavation work is still ongoing to unearth more coffins in the archaeological area.

It is worth noting that, in 2019, archaeologists discovered Al-Asasif cache, which included a distinguished group of 30 colored human wooden coffins of men, women and children. The coffins were all in a great condition and were found the exact same way they were left by the ancient Egyptians.