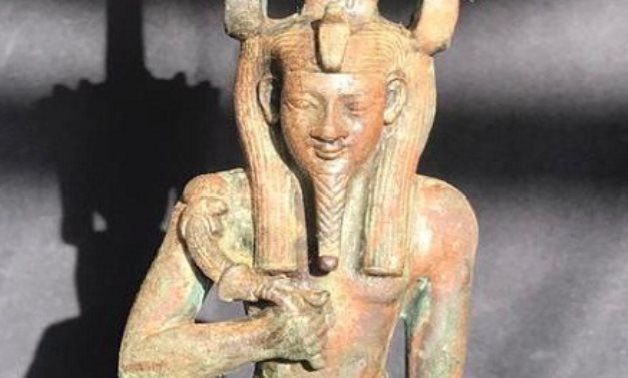 CAIRO - 2 October 2020: The Egyptian archaeological mission headed by secretary general of the Supreme Council of Antiquities Mostafa Waziry announced on Thursday the discovery of a carved bronze statue of the god Nefertum in Saqqara necropolis.

It is 35 centimetres tall and the name of its owner Badi Amunis engraved on its base. Badi Amun is from the 26th Dynasty.

The mission uncovered as well a number of intact wooden coffins.

The secretary general of the Supreme Council of Antiquities said that Nefertum statue is one of several statues that the mission discovered while performing the excavation work inside an 11 metre-deep burial shaft.

Egypt’s Ministry of Tourism and Antiquities revealed that it will announce more details about Saqqara discoveries on Saturday.

The newly uncovered burial shaft was found next to the shaft that was revealed last week and housed 13 coffins in Saqqara Necropolis.

The discovery was made by the Egyptian archaeological mission headed by Waziri.