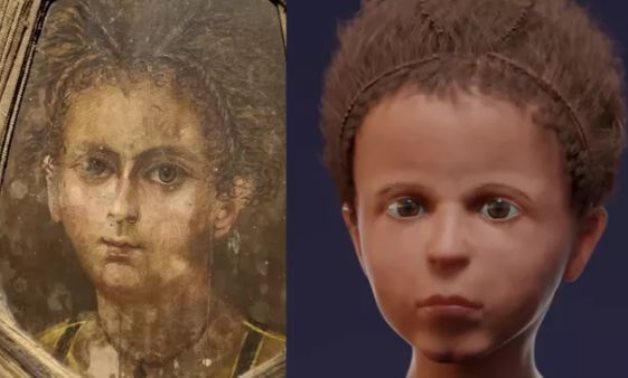 CAIRO – 22 September 2020: A group of researchers were able to restore the face of an ancient Egyptian mummy belonging to a child. The mummy was found in the eighties in a cemetery near the Pyramid of Hawara, southwest of Cairo.

The mummy was for a small child, who was infected with a deadly disease, most likely pneumonia. His small body was prepared for embalming and burial. Some of his organs were removed, his remains were wrapped in intersecting linen covers, and a picture of his face was attached to the front of the mummy.

This so-called "mummy image" was part of a common tradition among some Egyptians in the Greco-Roman period, from the first century until the third century AD.

But how accurate are these pictures?

To find out, a team of scientists in Austria and Germany examined the body of this little boy and made a 3D digital reconstruction of his face.

The results show that the image was fairly accurate, except for one aspect - making the young artist appear 3 or 4 years older, according to the study's lead researcher Andreas Nerlich's (director of the Pathology Institute at the Academic Clinic in Munich, Bogenhausen, Germany) comments to Live Science. “It may have been the result of a technical agreement at the time,” Nerlich said.

However, this single photograph does not reveal whether it was a common practice of ancient Egyptian artists to make young people appear older in their mummy portraits. Of the nearly 1,000 mummy portraits recovered from Greco-Roman Egypt, only about 100 remain attached to the mummy.

The project, which is the first of its kind to compare a mummy image of a young child from ancient Egypt with his reconstructed face, researchers chose the mummy of this boy. The 30-inch (78 cm) mummy, which dates back to 50 BC - 100 AD, is now in the Egyptian Museum in Munich.

The team examined the mummy with an x-ray in 1984, so they could create a digital, three-dimensional image of the boy's body. The CT scan revealed the removal of the boy's brain and some of his stomach organs, which is a common practice during mummification in ancient Egypt.

Nerlich said that the growth of the bones and teeth revealed the boy’s age when he died, most likely due to pneumonia, and they noticed “condensed lung tissue remnants” on the CT scan.

The researchers then focused on the boy’s face, writing in the study that the boy’s picture showed “curly hair with two woven strands of hair extending from the top to the ears.” The researchers added, "The boy has large brown eyes, a long, thin nose, and a small mouth with full lips. He wore a necklace hanging around his neck with a small medallion."

In the study, the researchers wrote that the facial reconstruction was "very similar" to the image, where the dimensions of the forehead to the eye line, and the distance from the nose to the mouth "are exactly the same in the image and the reconstruction."

They continued, “However, there were differences between the width of the bridge of the nose and the size of the mouth opening, both are much leaner and cramped in the image than the virtual reconstruction."

The two are very similar, Nerlich said, "The picture was probably prepared in a short period before or after his death." This was not always the case for the mummy portraits.

Previous studies of adult individuals whose portraits were attached to their mummies show that while some are very similar to reality, others are not.

One mummy of an old man with a grey beard showed a picture of the man when he was young, while another mummy known as the "Glyptothek Mummy" bore the image of a different person, based on the proportions of the skull, a previous research revealed.