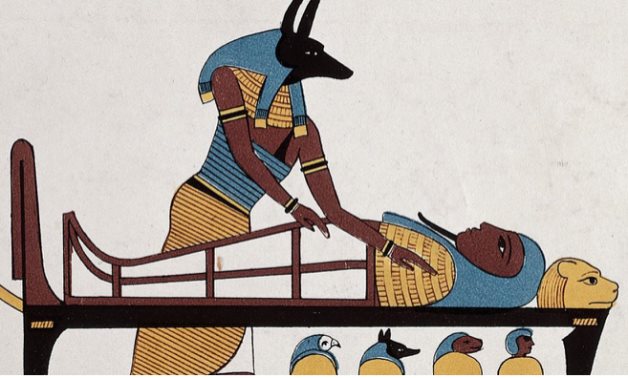 CAIRO – 18 August 2020: Dogs occupied a great place in ancient civilizations, especially in the ancient Pharaonic civilization. Dogs were an integral part of the daily life of ancient Egyptians, whether through raising them at home, accompanying them on hunting trips and battles, or using them to guard properties. Graves were also allocated for deceased dogs to be buried next to their owners.

Dogs were known in the ancient Egyptian language as "Io". The name is derived from the sound of dogs barking. Since the beginning of the Neolithic period, dogs have been known as hunters.

It was considered among the inhabitants of the ancient Egyptian house, where it sleeps next to its owner, or on the bed, accompanying the owners in their daily routines. Dogs were also used to guard herds, and accompanied their owners during battles!

The painting of 11th Dynasty King Intef I with his four dogs is the best evidence of the status of dogs in ancient Egypt.

In ancient Greece, Cerberus, the three-headed dog, guarded the gates of hell at the edge of the Styx, thus preventing damned souls from escaping. In the history of the Romans, dogs were considered a favorite pet like the Malta dog that had a place in the family and played with children. Most dogs were considered toys and food spoilers to the point of being obese. Nothing was too good for them so they turned their attention to luxurious dishes!

Julius Caesar expressed amazement at his return from Gaul to see in the arms of Roman women only dogs and monkeys instead of children.

In China, emperors left a place for their dog on the throne. In 1000 BC, small dog costumes appeared in the Chinese imperial courts. Chen Xin, a curator at the Royal Ontario Museum in Toronto, said that in Chinese history dogs received royal treatment and lived in high-end suites with marble floors and slept on pillows. Some men were assigned to take care of the pampered dogs and meet their needs. Women would design plush dog clothes and emboss each animal's name on the linings of the clothes.