Eagles, the worshipped bird of prey of the ancient civilizations 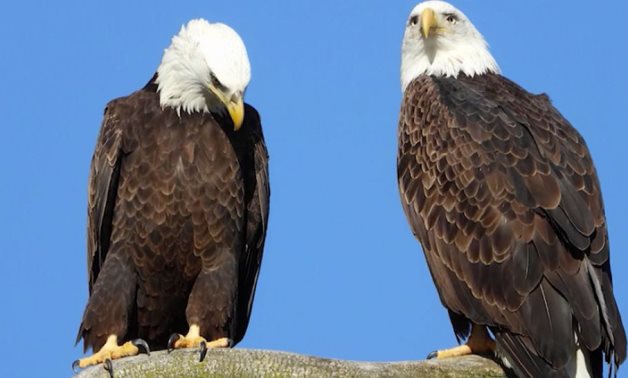 CAIRO – 17 August 2020: Eagles was the most prized bird of human interest in ancient times. It is the largest bird of prey. It mainly lives in Asia, Europe and Africa. Eagles are characterized by its long wings that are driven by strong muscles which makes it capable of flying high over long distances.

Even today, Eagles are greatly appreciated. It is the symbol of the Egyptian flag, and it always symbolized strength.

Ancient civilizations, including the Egyptian civilization, carried an interest in eagles that reached the point of sanctification.

During the following report, we explain what eagles represented in some ancient civilizations:

The eagle in the Pharaonic civilization used to symbolize the goddess Nekhbet, who was the eagle deity and represented Upper Egypt, which extends to Aswan.

According to researchers, among the birds that remained from the ancient world is the Nubian eagle; the eagle widely depicted by the Pharaonic inscriptions  on the walls of the temples in Luxor, which clearly illustrates the extent of reverence for that bird, especially in the era of the Old Kingdom.  Eagles were highly associated with the deity Nekhbet; the deity of Upper Egypt, and the protector of the king. The ancient Egyptian depicted Nekhbet as a female eagle with a white crown on her head.

In the civilization of ancient Greece, the Nubian eagle was associated with the god "Zeus"; the father of gods and humans to the Greeks. He ruled the gods of Mount Olympus as the heir father.

Zeus was dubbed the "God of Heaven", which the Greeks feared so much, because he controlled the terrible forces of nature such as lightning and thunder.

The ancient Greeks usually depicted Zeus in the form of a bearded, dignified man carrying a thunderbolt in one hand, and on the other hand stood a huge eagle spreading its wings, or  sitting with his scepter by his feet, where the eagle stands.

According to the study "The Legend of the Eagle and the Search for Immortality in Pre-Islamic Poetry" by the researcher Ihssan Al-Deek, published in the Journal of "Humanities and Social Sciences" Volume 37 in 2010, and in the ancient Mesopotamian civilization, the Thunderbolt God (Zu) appears with the claws of an eagle. Seers and priests used it as a means of omen and foretelling, and its feathers in the unseen.

They believed that “if an eagle passes from the king's right side to the left, the king will be victorious wherever he goes.

If an eagle caught a fish or a bird, flew it away, and then devoured it in front of a man, the latter would suffer a loss.

Also, the people of Mesopotamia believed that if an eagle eats a dove on a man’s house and then leaves something behind, the owner of the house will get rich.

The aforementioned study also states that Arabs -before Islam- and their narrations confirm that an eagle was one of their ancient gods. They even created an idol to worship in the form of an eagle.

It is one of the idols of Noah, peace be upon him, mentioned in the Holy Quran.