Who is the woman dubbed as “The Screaming Mummy”? 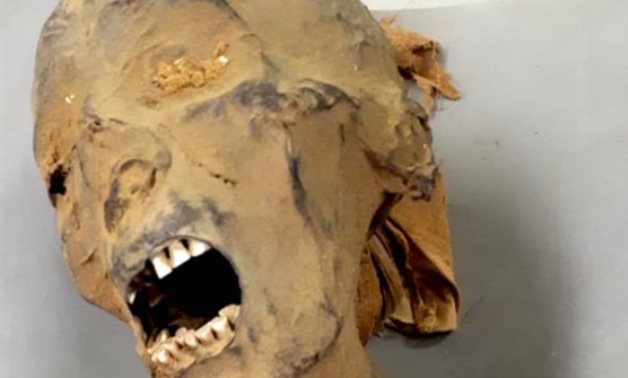 CAIRO – 15 July 2020: In 1881, the Deir el-Bahari Royal Cache was discovered in Luxor, where priests of the  21st and 22nd Dynasties hid the corpse of royal members from previous Dynasties to protect them from grave robbers.

The cache of the Deir el-Bahari Royal Cache included a mummy that was dubbed “The Screaming Mummy".

Recent studies with CT scans and DNA carried out by  Zahi Hawas and the scientific team of the Egyptian Mummy Project proved that "The Screaming Mummy" is the corpse of Prince Pentawere; the son of King Ramses III, who was forced to commit suicide by hanging as a punishment for his involvement in the killing of his father, King Ramses III, in what is known as the harem plot.

The murderous son was further punished by not mummifying his body and wrapping it with sheep skin, which indicates that he was considered (unclean) and destined to hell in the afterlife, while the other mummies were wrapped in white linen and carefully mummified.

The same royal cache in Deir el-Bahari contained a mummy of a woman showing signs of terror, pain and screaming on her face, known as the "Screaming Woman Mummy". Her head is tilted to the right side, and her legs are bent and wrapped at the ankle, while the other mummies are closed-mouthed and placed in a straight position.

So what is the truth about the “Screaming Woman Mummy”? Why was she placed to rest in a different manner than all the other mummies of her time? Did the “Screaming Woman” face the same fate as Prince Pentawere; punished with death and was not embalmed in a royal way like the rest of the princesses?

To solve this mystery,  Zahi Hawas and Sahar Selim, professor of radiology at Cairo University, carried out a study on the mummy and examined it on the Siemens CT machine located in the Egyptian Museum in Cairo.

Writings in the hieratic language on linen scrolls about the woman's screaming mummy refer to it as: "The Royal Daughter, The Royal Sister Meritamen." However, the mummy was considered unknown and was labelled "The Mummy of the Unknown Woman", as there were many princesses with the same name, for example Meritamen, daughter of King Seqenenre Tao of the Seventeenth Dynasty (1558 - 1553 BC), in addition to Meritamen the daughter of King Ramses II (1279-1213 BC) of the Nineteenth Dynasty.

The results of the CT scan done by veteran archaeologist Zahi Hawas and Sahar Selim indicate that the woman's screaming mummy is of a woman who died in her sixties and that her body (unlike that of Pentawere) had received great care from the mummifiers  who removed her viscera and inserted expensive materials such as resin and scents in her body cavity , using pure linen to wrap the mummy.

Computerized tomography results indicate that "unknown woman’s mummy" was infected with severe atherosclerosis, which affected many arteries of the body.

Atherosclerosis is a degenerative disease that progressively affects the arterial wall, leading to a narrowing of the cavity and blockage of the blood vessel.

Arterial sclerosis is determined in a CT scan as areas of high calcification within the arterial walls, which can be identified according to the location of the artery.

Previous studies done by Hawass and Selim on the ancient Egyptian royal mummies indicated the presence of atherosclerosis in some of them.

Ancient Egyptian medicine has known the "heart attack" and linked it to death. The ancient Egyptian medicine papyrus, known as Ebers, described a doctor over 3500 years ago when he examined a man who suffered from stomach pains, and pain in his arm and chest. The ancient doctor explained in the papyrus text that “this is the WAD disease, which is equivalent to a heart attack. You must inform the man that death is approaching”.

A CT scan of unknown woman’s mummy showed that she had suffered from stiffness in the right and left coronary arteries, as well as the neck arteries and the abdominal and iliac aorta, in addition to the arteries of the lower extremities and legs.

Numerous modern clinical studies have demonstrated that coronary hardening disease of the heart is the leading cause of sudden death in adults. Modern medicine is recommending in such a serious medical condition, similar to the case of the woman's screaming mummy, to give medicines that dissolve blood vessel clots and possibly a cardiac catheterization. This is to prevent or reduce damage to the heart muscle.

The study, conducted by  Zahi Hawas and Selim assumes that the coronary vascular thrombosis of unknown woman’s mummy caused damage to the heart muscle, which led to her sudden death.

Furthermore, the study assumes that the princess died suddenly of a heart attack, in the exact current body position with her legs bent and wrapped at the ankle.

The death caused the head to tilt to the right and the jaw muscles to relax, which opened the mouth.

Evidence indicates that the deceased stayed lifeless for a  long period of time in the aforementioned  position before the body was eventually discovered. The post-death spasticity stiffened the muscles and joints and kept the princess's mummy in this position for thousands of years.

The embalmers  were unable to secure the mouth shut or put the body in the usual burying position as was the case with other deceased princesses.

Previous studies conducted by Hawass and Selim on royal mummies using CT scans helped to define the features of embalming in different Dynasties.

Hawass, Selim and the rest of the scientific team will complete the Egyptian Mummy Project and conduct DNA tests on the “woman’s screaming mummy”, which may help confirm her identity.