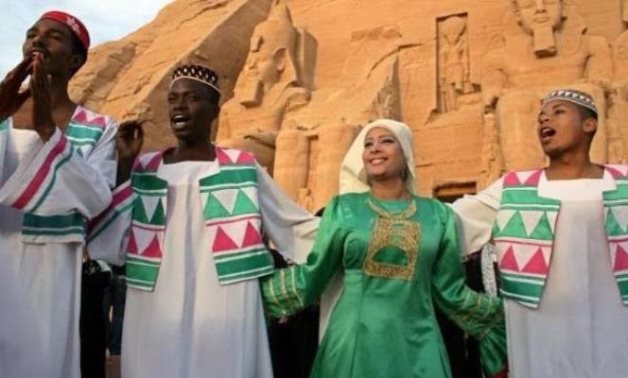 CAIRO – 7 July 2020: Nubians celebrate their day on July 7, not for a specific reason, except that the number 7 has an important connotation in their history, days, and different cultural rituals.

On this occasion celebrated by all the people of Nubia, we find ourselves asking a question about the role of this region in the history of human civilization.

There is a clash of civilizations, even on the starting point; every ethnic group has the right to claim to be the creator of the first civilization if evidence is provided to support the claims.

Civilization in Egypt started from the south, from the land of Nubia. The people of Nubia always assert that they are the origin of civilization in the ancient world as a whole, which is confirmed by history.

Nubia is very large, starting from South Aswan to North Khartoum in Sudan. Its existence overtime is closely related to the River Nile, and the word "Nubia" means gold; hence, the land of Nubia means the land of gold. Nubia is an ancient Egyptian word, as the region was famous for gold mines.

The ancient Egyptians used to call the land of Nubia the Kingdom of Kush, a late name that is only 5,000 years old; however, the civilization of Nubia existed well before it, and before the formation of the kingdoms.

Archeologists discovered artifacts dating back to the Neolithic period, which extends between (9,000 and 4,000 and 500 years BC), including pieces of pottery and porcelain.

The first Nubians used to domesticate animals and benefit from them, and there is evidence that is 7,000 years old, according to David Edwards in his book “The Nubian Past”.

In the north of Wadi Halfa in the Khor Musa area, there was a 10,000-year-old civilization in the Qastal and Wadi Al-Alaq regions.

The antiquities confirm the presence of a 10,000-year-old civilization in an area called Khor Bahan, which is located in the east of Aswan. This is proven with the discovery of types of pottery, which are distinguished by their pink colors and decorated pots.

On the other hand, the people of Nubia were powerful warriors that even the ancient Egyptians used to call Nubia at one time "Ta City" which was actually the name of a kingdom that existed between the area of ​​Halfa and Aswan and ended around the year 3,000 BC. It means the "land of the bows", attributed to their skill in archery as warriors.