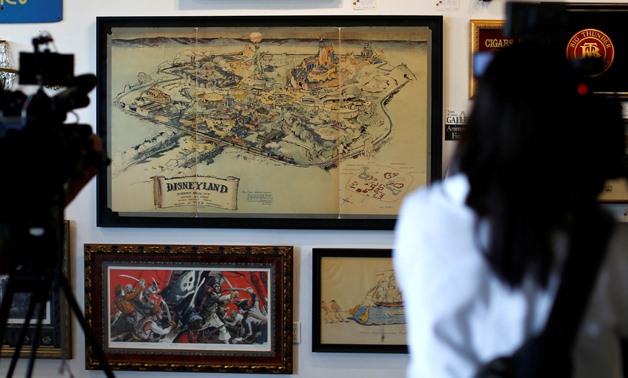 Reuters - 26 June 2017: Walt Disney's "presentation map," which the late animation entrepreneur drew in the 1950s to attract investors to the idea for his legendary theme park "Disneyland," sold for $708,000 at an auction of Disney memorabilia on Sunday.

The price set a record for a Disney map and was among the highest ever paid for a piece of Disney ephemera at auction, organizers said. Still, it fell short of the predicted $900,000.

"After some pretty exciting bidding, the map sold for $708,000, making it the most expensive Disneyland map ever sold," said Mike Van Eaton, co-owner of Van Eaton Galleries.

"We are beyond thrilled that the map will continue to be appreciated and cherished just like it has been for all these years," he said.

The buyer was not revealed.

The map was one of the highlights of some 700 lots at the "Collecting Disney" auction, held by Van Eaton Galleries in Los Angeles. The sale of items drawn mostly from private collections was expected take in between $2 million and $3 million.

Disney co-founded an animation studio in 1923, which eventually grew into a feature film production studio with films such as "Snow White and the Seven Dwarfs," "Bambi" and "Cinderella." He died in 1966 aged 65.