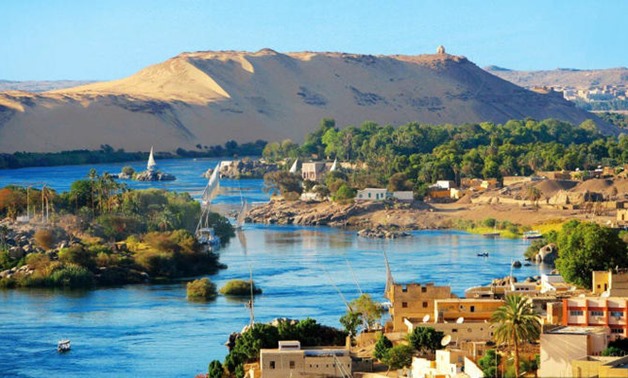 Egypt, The gift of the Nile.

CAIRO – 28 June 2020: When many contemplate the name "Nile", the first thing that comes to their minds is Egypt, which is easy to explain, given the great importance of this river to Egypt throughout history.

The famous Greek historian Herodotus summarized the importance of the river to the Egyptians by saying "Egypt is the gift of the Nile".

There are many myths associated with the Nile, including that the Nile is the gift of the gods, and that its flood season begins with the appearance of the brightest star; when it overflows, it brings prosperity and fertility; the gods control the river, and the deity Khnum is the lord of the water who brings prosperity and creates humans from the mud of the Nile River flood; the deity Habi controls the flood of the Nile because he is both genders and therefore very fertile; parts of the body of the severed god Osiris is in the Nile; and that the Nile’s flood and its decline were linked to the death and resurrection of Osiris and the myth of worshiping the Nile animals (the crocodile deity Sobek).

The water ram-headed deity Khnum forming humans on his potter’s wheel - Canadian Museum of History
The ancient Egyptians thought that the Nile is the gift of the gods. They equated it with life itself, and they organized their daily lives according to the high and low levels of its water. The Egyptian calendar was based on the three seasons of the Nile: The flood, agriculture, and harvest.

The flood season began with the appearance of "Al-Shaary Al-Yamani" or "Sirius", which is the brightest star. Its appearance also means the beginning of a new Egyptian year. Papyrus depicting Isis and Osiris
Herodotus' sayings and recordings show that the flood of the Nile was coincident with the summer solstice phenomenon, that is, June 22/23 of every year.

Because the Nile means life, when it overflows it brings prosperity and fertility to the soil and people around it, but if its water level rises too much, people lose their mud houses, and if the level does not rise enough, drought and famine occur.

Thus it was important for the gods to control the river. The two main deities involved in organizing this process are Khnum and Hapi, according to legend.

Khnum, the Nile god with a ram's head, was the god of water, who brings life to the banks of the river, where plants grow and animals reproduce, and since silt forms after the flood, Khnum was also thought to create humans.

Elephantine Island, now in Aswan, was home to worshipping Khnum, while his temple is located in the city of Esna, located 60 km south of Luxor Governorate in Upper Egypt.

As for the god Habi, he was the one in control of the flood of the Nile. Usually, this god appears in both genders, having male features and a female upper body, which reflects both the personality of the father and mother of the Nile, and so he/she is able to achieve fertility. Surprisingly, the word “Habi” means "happy" in the ancient Egyptian language. In addition, God Osiris played a role in one of the famous legends of the Nile, and this legend says that Osiris was killed by his brother Set because of jealousy. His body was cut into 40 pieces, and thrown into the Nile, which, in turn, threw shredded parts of Osiris' body in the Mediterranean.

However, his wife, Isis, succeeded in finding and collecting his body parts, and thanks to the magic powers she possessed, Isis managed to revive Osiris and conceive a child, and then gave birth to Horus who grew up in the papyrus field in the delta, far from his malevolent uncle Set.

Later, the god Horus succeeded in avenging his father, Osiris, by killing his uncle Set, and from here the death and resurrection of Osiris became associated with the flood of the Nile and the decline of its water level.

Some sources say that the ancient Egyptians believed that the flood of the Nile was the tears of Isis, mourning the death of her husband Osiris, which is what is now called in Egypt “Wafaa el-Nile” [Loyalty of the Nile], which the Egyptians celebrate for two weeks starting from August 15.

For this reason too, sources indicated that Egyptians threw similar items into the River Nile "until it calms down and stops flooding." Ancient Egyptian crocodile deity Sobek
Furthermore, many Nile animals played a major role in ancient myths indicating that the ancient Egyptians' fear of crocodiles and hippos pushed them to worship them, so as to ensure their protection from attacks and from evil in general.

The crocodile "Sobek" was a god worshiped in Fayoum, and in Kom Ombo in Aswan. Some fish and birds of the Nile were seen as a sign of abundance, livelihood and resurrection in the afterlife.

In 1954, the Egyptian leader at the time, Gamal Abdel Nasser, decided to build the High Dam in Aswan on the banks of the Nile. However, the artificial lake behind the dam threatened the monumental temples of Abu Simbel as well as other Pharaonic treasures.

Therefore, Egypt and Sudan launched an urgent appeal to UNESCO in 1959 to protect antiquities. Indeed, 22 artifacts have been saved, including the Abu Simbel Temple, which has been dismantled to 16,000 pieces and moved to a new location in a process that required the participation of some 2,000 scientists, engineers, experts, and workers.