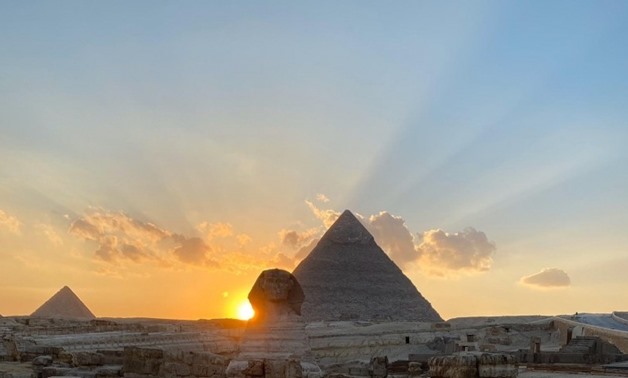 Sun Setting on the shoulder of the Sphinx, an astronomical phenomenon called Equinox - Press photo

CAIRO - 23 March 2020: On March 22, the Pyramids' archeological region witnessed a distinct astronomical phenomenon, as the sun set on the right shoulder of the Sphinx.

Former Minister of Antiquities Zahi Hawass noted that the phenomenon occurs twice a year over the course of four days, as the sun sets on the right shoulder of the Sphinx, on March 21 and 22, and September 21 and 22, that is, in spring and autumn. The phenomenon is called Equinox, meaning when the night and day become equal.

Hawass continued that the sun, after falling at sunset on the right side of the sphinx, heads south, and during the summer it moves to the north.

The veteran archaeologist and former minister of antiquities emphasized that a more significant phenomenon, called Solstice, can be seen on June 21 and 22. It is when the sun sets directly between the Pyramid of Cheops (Khufu) and the pyramid of Chephren (Khafre).

Hawass pointed out that the phenomenon proves that archaeologists made a mistake when they said that the ancient Egyptians accidentally found an ancient rock and turned it into a statue with a human face and an inhuman body.

He further explained that the phenomenon proves that there is an astronomical and religious reason for sculpting the statue of the Sphinx, which is the sun god, that rises and sets between the horizons of the pyramids of Cheops (Khufu) and Chephren (Khafre).

This theory is unique and confirms the tremendous scientific superiority of the ancient Egyptians.