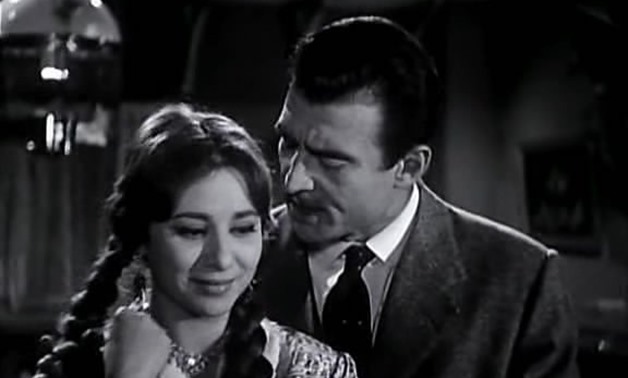 CAIRO - 15 February 2020: Whether you are single or in a relationship everyone at some point enjoys a romantic film, for the escapism it offers and for the fact that we all like a bit of romance especially if it has a happy ending. Egypt Today has come up with 10 classic romantic films that are a must watch if you regard yourself a movie fan.

One of Egypt best classic films, The Nightingale Prayers – Do'aa Al Karwan, starring Faten Hamama, Ahmed Mazher, Zahrt Al Oala, Mimi Shakeeb, Amina Rezq and Rajaa El Jedawy in her first ever appearance as an actress, adapted from Taha Hussein's novel and directed by Henry Barkat the film was produced in 1959. It tells the story of Amna played by Hamama who watches helplessly as her sister Hanady portrayed by Al Oala being killed by their uncle to 'wash' their shame, after Hanady fell in love and gave herself into temptation with her employer, the engineer played by Mazher. Amna swears revenge on the culprit – the engineer, who she regards as the one that should have been killed and not her sister, the victim. As she goes to work for him, plotting to murder him once she seizes the chance, Amna soon finds herself falling in love with the engineer, the cause of her family's misery. Its an essential watch that will keep you gripped, just don't expect a happy ending.


I Am Leaving – Eni Rahela

Another classic novel that was turned into a film, I Am Leaving – Eni Rahela written by Yousif Al Seba'ee and directed by Ezz Eldine Zulfekar was premiered in January of 1955. A love story marred by social class, betrayal and greed with tragic consequences. There are few films that can bring a book to life and do it justice and I Am Leaving – Eni Rahela certainly fits the bill and one of the best. Starring the elegant Madeha Yousry as Aida who is in love with Ahmed played by the 50s leading star of romance Emad Hamdy, who are soon separated by the prejudice and greed of her father who is portrayed by Saraj Mounir. Again it is not a happy ever after ending but a powerful one that will stay in your memory for years.

Some of the best films are the ones that are based on a classic literature and this is another film that was taken from a novel by Muhammad Adel Halim Abdullah though the film took a different title to the book but the plot remained faithful to the original story. Produced in 1959 and directed by Al Sayed Badir the film follows the story of Hosni played by the heartthrob of the time Kamal Al Shenawy, who has is weary and distrustful of women, he can almost be described as a misogynist, but all this is pushed aside when he moves to Cairo and falls in love with his neighbour Zainab portrayed by the beautiful Zobeida Tharwat. But this relationship is soon tested when Hosni's old demons return and he pushes Zainab away. Unlike the previous films this one has a heart warming end that will give the viewer the feeling that yes, sometimes love can overcome everything even inner demons. The film also stars Lalya Taher, Abdel Moneam Ibrahim, Wedad Hamdy, and Aziza Helmy.

Carrying on the theme of literatures based films,The Empty Pillow – Al Wesada Al Khalyea is one of Ihsan Abdel Kodous most loved novels and the fact that it starred Abdel Halim Hafz, every girls' dream at the time, makes this film a must watch. Produced in 1957 and directed by Salah Abu Seif, the film explores the myth of one's first love and its impact on an individual, the fact that the film is partially musical adds to the romantic factor effect. Hafiz is joined by Lobna Abdel Aziz, Ahmed Ramzy, Omar Al Hariri, Zahrt Al Oala, and Abdel Moneam Ibrahim. The film has an unusual end, though it is a fairly happy one but it does not reunite the lovers or the stars of the film.

Yes, its another film based on Yousif Al Saba'ae novel of the same name. Produced in December of 1957 and directed by Ezz Eldine Zulfekar, My Heart's Reply – Rad Qalbi is probably one of the first films that explores life before and after the 52 revolution. The film follows the love story of the gardener's son, Ali played by Shukri Sarhan and princess Anji, who is played by Maryam Fakher El Dine, their love seems to be doomed due to their social status but things are soon changed when the revolution takes place. The film host a galaxy of stars; Hussein Readh, Ahmed Mazher, Salah Zulfekar, Fardoos Muhammad, Hind Rostom, Roshdi Abaza, and Zahrt Al Oala . A feel good film with a bit of history, definitely worth watching.

It is just not possible to list romantic movies without including the king and queen of romance; Omar El Sharief and Faten Hamama, their films alone can create a list but we have chosen one of their lesser famous one, The Palace Lady – Sayedt El Qasr, because it represent a simple love story of a poor hard working orphan played by Hamama and the care free rich Adel (El Sharief) and how their love is tested by Adel's lifestyle and friends. The film is directed by Kamal El Sheikh, written by Hussein Helmy El Mohands, produced in 1958 and other co-stars included; Estefan Rosti, Zuzu Madhi, Omar El Hariri and Fardous Muhammad. The film is simple with a happy ending, a perfect choice if you just want to block your thoughts and relax.


Barefoot On A Golden Bridge – Hafyea Ala Jesr El Dhab

Hamama and Sherief might have dominated the world of romance during the 50s and 60s but the 70s definitely belonged to the new golden couple; Mervat Amin and Hussein Fahmy. Barefoot On A Golden Bridge – Hafyea Ala Jesr El Dhab, directed by Atef Salm in 1976, written by Ibrahim El Wedrany, revolves around Camila played by Amin who dreams of becoming an actress where she meets the director Ahmed portrayed by Fahmy and a love story is soon ensued by both until Aziz the influential and powerful figure played by Adel Adaham decides he wants Camila for himself and threaten her with Ahmed's life. It is a powerful love story that gives the viewer the other side of what love entails; sacrifice and selfless devotion.

Not many would associate the late Mahmoud Abdel Aziz as a romantic figure but during the 70s and 80s he formed a couple with few actresses on screen that made him the ideal love interest. In 1980 he starred in A Love That Does Not See Sunlight – Hob La Eara El Shams, alongside Najla Fathy, Sofia El Omary and Farid Shawky, directed by Ahmed Yehyea and written by Mahomud Abu Zeed. The film focuses on divided loyalties that love can bring, Ahmed played by Adel Aziz is happily married to Amal (El Omary) but is forced by his father (Shawky) who is obsessed with having a grandchild, to marry another who can bare children. The father finds the suitable wife, Ahlam (Fathy) a poor girl in need of money to pay for her mother's medical treatment and so she agrees. Ahmed at the start reject Ahlam but with time he finds himself falling in love with her and that is when he is torn between his love for his father, Ahlam and Amal. Prepare yourself a box of tissue as this film guarantees that tears will be shed.

Directed by Henry Barkat in 1970 and based on Taha Hussein novel, Lost Love – El Hob El Thayea' is probably on the most powerful films in this list because of its unconventionality. Not often the viewers are left neutral, not taking sides between the characters and understanding the action of each one without judging them. The is about friendship and love and how when they are pitted against one another; one will have to be lost. Layla played by Soad Hosni has been friends with Samia portrayed by Zubaida Tharwat since childhood but this friendship is thrown into turmoil when Samia's husband played by Roshdy Abaza and Layla fall in love, and the friends are faced with the choice of sacrificing their friendship or love. One of the best and most complicated romantic film you are likely to ever watch.

Written and directed by Tarek El A'rian in 2001, some claim that Snakes and Ladders – El Silam Wel Tha'ban is based on El A'rian's own personal experience but this has never been confirmed. The film revolves around Hazm played by Hani Salama, a playboy figure who after his divorce just does not want to commit to any girl, opting to play the field instead but when he meets Yasmen portrayed by Hala Shiha he can't seem to win her over like all his other conquests. Although he eventually falls in love with her, he still struggles with the idea of commitment and giving up his freedom. When it was released Snakes and Ladders – El Silam Wel Tha'ban created a new direction within the film industry and in particular in romantic films, the inclusion of songs by Khalid Salem though he was not acting in the film, opened the door for films to add more effect to the romantic factor by having songs. The film also stars Ahmed Helmy, Rajaa El Jadawy and Tarek El Tolmansani.


There are so many other films that we could not include in our short list but we chose to focus on films that are often overlooked by the mainstream media.