The 40th edition of (FITUR) is scheduled to kick off on Jan.22 , in the Spanish capital, Madrid, and resumes until Jan. 26.

For her part, Shalaby stressed the importance of the Ministry's participation in this exhibition, which is considered one of the three most important international exhibitions around the world, describing the Egyptian participation as a great opportunity to enhance the Egyptian presence on the international tourist map, providing direct contact with the operators of the tourism and aviation industry in the world.

The Deputy Minister of Tourism and Antiquities added that on the sidelines of the opening of the exhibition, several intensive professional meetings will be held with a number of tour operators interested in the Egyptian market in addition to tourism and aviation companies operating in the Spanish market. This will activate the Ministry's promotional policy for Egyptian tourist destinations, improving its image, which in turn will push the movement of revitalizing foreign tourism to Egypt.

For his part, Head of the Egyptian General Authority for the Promotion of Tourism Ahmed Youssef explained that (FITUR) is the third most important global tourism gathering after the Berlin Stock Exchange and London and the largest tourist exhibition for Spanish-speaking countries, whether in the Iberian Peninsula or Latin America, pointing out that the participation of the Ministry of Tourism and Antiquities in this exhibition comes within the framework of its keenness to be present in various international forums and exhibitions, as an effective method of promotion to attract more tourists to the Egyptian tourist destination from the tourism exporting markets.

The Egyptian pavilion in the exhibition has been designed in the form of a Pharaonic temple, in modern colors, equipped with columns, with hieroglyphic writing. This is in support and promotion of the product of cultural tourism in a way that suits the trends of the Spanish tourist interested in cultural tourism.

During the exhibition's activities, the Grand Egyptian Museum will be highlighted, which is scheduled to open in the last quarter of 2020, and that is by allocating a huge screen in the Egyptian pavilion to display a documentary film on the museum's construction and preparations for its opening, in addition to using the hologram technology to display the mask of King Tutankhamun and his throne.

The Egyptian pavilion will include display screens on its external sides to display promotional films on various Egyptian tourist destinations. It will also include a theater with a background picture of female players, so that the visitors of the pavilion can take memorial photos for them, in addition to using an orchestra to perform harp and violin music.

It is worth noting that the Egyptian pavilion participating in the exhibition this year has an area of about 310 square meters, with a privileged location directly on the main entrance to the hall designated for the countries of the Middle East, attached to the Europe Hall.

About 31 participants representing 10 hotels and 20 tourism companies in addition to EgyptAir will participate in the Egyptian pavilion this year. 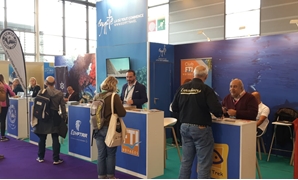