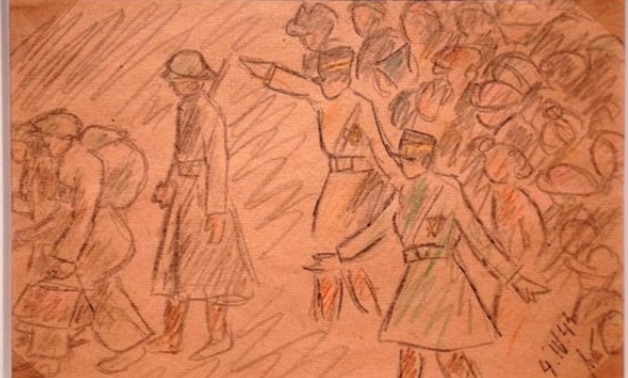 A work of art by Helga Weissova is pictured at the preview of "Rendering Witness" exhibition at the Museum of Jewish Heritage in the Manhattan borough of New York City, New York, U.S., January 15, 2020. REUTERS/Carlo Allegri

NEW YORK (Reuters) - Michael Morris, a curator at New York’s Museum of Jewish Heritage, was trying to fulfill a run-of-the mill request when he uncovered a treasure trove of eyewitness depictions of the Holocaust, drawn in pencil, ink and crayon.

“It was a light bulb moment,” said Morris, who put together an exhibit of art created by some of the 6 million Jews killed by the Nazi regime.

“Rendering Witness: Holocaust-Era Art as Testimony,” which opens this week at the lower Manhattan museum, comes at a time when U.S. anti-Semitic hate crimes have spiked and memories of the horrors of the Holocaust are fading.

“This exhibition stands against and educates about the dangers of anti-Semitism, racism, bigotry of any kind,” said Morris, describing the 21 powerful depictions of the Holocaust, mostly by Jewish prisoners.

It all started with another institution’s request to borrow some of the pieces in the museum’s collection. As Morris reviewed the dozens of works in its vaults, he knew immediately that it was high time for the museum to mount an exhibition of its own.

“Behind the statistics, and behind the numbers and behind the scenes where we see hundreds of thousands of people in concentration camps, these are actual people who had multi-faceted lives,” Morris said.

Among them was a 12-year-old girl, Helga Weissova, who brought art supplies with her when she was sent to Terezin Ghetto and concentration camp, about 30 miles (48 km) north of Prague in the Czech Republic, in October 1944. Before Weissova was deported from Terezin to Auschwitz, the infamous slave-labor camp in southern Poland, she gave her drawings to her uncle, a fellow prisoner who hid them behind a wall.

Weissova is now in her 90s and living in Prague, but many of the artists never made it out of the deadly camps.

Peter Loewenstein of Czechoslovakia was deported in 1941 to Terezin. He gave the 70 drawings to his mother before he was then deported in 1944 to the notorious Auschwitz camp.

His mother and sister would soon be deported to Auschwitz as well, but not before turning over the art to a family friend.

His sister, the only family member who survived the camp, recovered the portfolio after the war, including “Eight Men in Coats with Stars,” a 1944 ink on paper depiction of Jews forced to wear identification badges.

Equally powerful is a watercolor by Marvin Halye, a member of the 104th Infantry Division of the U.S. Army, who liberated Nordhausen concentration camp in Germany in 1945.

After seeing the few surviving prisoners tending to thousands of bodies, he rushed to paint “Liberation of Nordhausen, Civilians Covering Corpses.”

The show, which runs Jan. 16 through July 5, opens amid a spike in anti-Semitic hate crimes across the United States and particularly in New York City, home to the largest Jewish community outside of Israel.

Anti-Jewish hate crimes in New York in 2019 were at a 28-year high, according to professor Brian Levin, director of the Center for the Study of Hate and Extremism at California State University, San Bernardino.

In the most recent attack, a machete-wielding man wounded five people gathered last month for a Hanukkah celebration at a rabbi’s home in the New York City suburb of Monsey.

Hate crimes are escalating at a time when many American adults lack basic knowledge of the Holocaust.

The greatest gaps in understanding are among U.S. millennials - people in their 20s and 30s. Two-thirds of them do not know what Auschwitz is, said a recent survey by the Conference on Jewish Material Claims Against Germany.