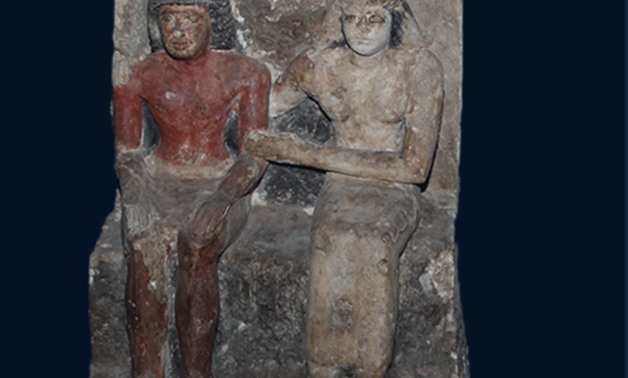 CAIRO - 7 January 2020: Malawi Museum announced the result of the voting on the artifact of the month. Four artifacts were competing on the museum's official pages on social media.

The museum's management announced that the winning piece is a double limestone statue dating back to the Old Kingdom's Sixth Dynasty. The artifact will be displayed in Malawi Museum until the end of January.

The statue was discovered in Mir region and is 87 cm in height. It was restored after the unfortunate events that hit the museum in 2013 at the hands of the Muslim Brotherhood.

Malawi Museum was established on June 23, 1962 in Minya during the era of late President Gamal Abdel Nasser. It consisted of two floors with four halls showing Pharaonic, Greek, Roman and Coptic artifacts, in addition to the artifacts of Tuna el-Gabal, the Asmunites, Tel Amarna, and Medieval Egypt.

The museum was subjected to unfortunate violence and theft, after the dispersal of Rab’a and Nahda sit-ins in 2013.

It took more than 3 years to restore and develop the museum. It now contains 944 artifacts, including 441 old exhibits, and 503 new ones from the Bahnasah, Ashmounin and Minya stores.

The total cost of the museum's development project reached LE 11 million distributed between Minya Governorate, which provided LE 1,150,000 of the governorate's funds; and an Italian grant worth LE 4 million in the form of display cases for the museum's exhibition halls. The grant comes within the framework of the debt swap project.

The exhibiting scenario inside the museum was changed, beginning with a statue of a family, representing an important pillar in any community.

The museum consists of only three exhibition halls. The fourth hall has been converted into a place for children's educational activities, in addition to a library for scientific research to serve university students in Minya and Assiut.

A lecture hall was added, as the museum's new administration found that the communal role of the museum should be revitalized. Malawi Museum was reopened on September 22, 2017.