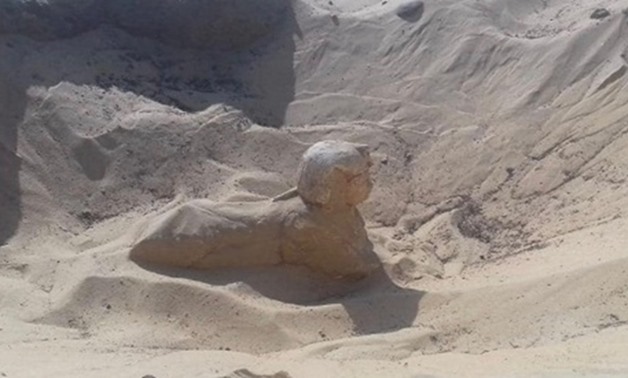 File- A small royal statue of a sphinx was uncovered in Tuna El-Gebel.

CAIRO – 30 December 2019: Over the last two years, a large number of new discoveries in Egypt have grabbed the world’s attention. Egypt Today Magazine will provide its readers with a capsule of all the discoveries that occurred in 2019.

1- On November 17, a 2,200-year-old temple was uncovered in Sohag in Egypt. It is believed to belong to Ptolemy IV Philopator of the Ptolemaic Kingdom. The structure of the ancient cemetery was found by chance as excavators supplied sewage lines to the village of Kom Ashqaw in the city of Tama, north of Sohag, according to the Egyptian Ministry of Antiquities' post on its official Facebook page


2- On November 7 a multi-layered cemetery dating back to the Roman, Greek and pre-dynastic eras was uncovered in Ismailia. Head of Egyptian Antiquities Sector Ayman Ashmawy explained that the discovered part is a multi-layered cemetery, whose upper layers consist of mass graves of mud-bricks from the Greek and Roman eras. The lower layers of the cemetery consist of burials from the pre-dynastic era.

3- On November 5,the Ministry of Antiquities announced the discovery of an archaeological cemetery in Saqqara. It is the first discovered cemetery from the Roman era in this region. During the last excavation season, a joint Egyptian-Japanese archaeological mission in North Saqqara succeeded in uncovering a Roman catacomb tomb, spanning back to the first and second centuries AD.

4- On November 1, acclaimed Egyptian Egyptologist Zahi Hawass announced in London on the side-lines of Tutankhamun exhibition that Queen Nefertiti could be one of the mummies discovered at the Valley of Kings. Hawass added that using the modern DNA techniques" we can now if Queen Nefertiti is one of the mummies discovered in the Valley of the Kings.

5- On November 1, the "Tutankhamun: Treasures of the Golden Pharaoh" exhibition was inaugurated in London. The exhibition houses more than 150 original artifacts from the golden pharaoh tomb, 60 of which are travelling out of Egypt for the first and the last time before they return for permanent display in the Grand Egyptian Museum. Minister of Antiquities Khaled Anany, Ambassador in London Tarek Adel and Hawass participated in the official opening ceremony, also attended by many British officials, public figures, foreign ambassadors, Egyptologists, academics. Anany gave a lecture in the Egyptian Cultural center in London about the latest archaeological discoveries, projects and museums in Egypt. This lecture came on the side-lines of Anany visit to London to witness the opening of King Tut exhibition which moved to the British capital, London, on November 1, in its third stop after Paris and Los Angeles.
London's main streets, squares, metro and train stations are decorated with pictures of the Golden King's face and some of his belongings. Walls of shops, buildings and telephone booths are also adorned with banners about Tutankhamun's exhibition, which is now in London after an absence of nearly 12 years, as the last exhibition of King Tut's possessions took place in London was in 2007.

6- On October 19, thirty intact, sealed and painted anthropoid coffins of a group of 22nd Dynasty priests and priestesses of Luxor’s deities Amun and Khonsu were discovered in Asasif necropolis in Luxor. Minister of Antiquities Khaled Anany announced this important discovery at a press conference at Hatshepsut Temple. This is the first cachette of coffins to be uncovered in Luxor since the end of the 19th century.

7- On October 10, renowned archaeologist Zahi Hawass said that the Egyptian expedition which he is heading in Luxor managed to discover two new archaeological discoveries. The first discovery as recounted by Hawass was in the West Valley, also known as the Valley of the Monkeys, and the second one was in the East Valley, which houses the famed pharaonic tombs. Hawass said that the Egyptian expedition has uncovered “an industrial area” for the first time ever in the location. The Expedition has been working in the Valley of the Monkeys since December 2017.

He further added that the area houses an oven tailor made for making clay products, and a water storage tank used by workmen. The findings discovered at the site include: a scarab ring and hundreds of inlay beads and golden objects which were used to decorate royal coffins. Some of the discovered inlays are decorated with the wings of Horus. Hawass announced that the excavation in the West Valley is searching for the tombs of Nefertiti and Ankhsenamun, her daughter and the widow of Tutankhamun.

He said that he thinks that the wide valley between the tomb of Amenhotep III and Ay could be the place that houses the tombs of the Amarna family. Hawss announced as well that the discovery of 30 workshops is very important. They are comprised of storage buildings and buildings for the cleaning of the funerary furniture, and contained many pottery finds dated to the eighteenth dynasty. The Egyptian expedition has also discovered a royal tomb, labelled KV 65. They found inside it tools used for tomb construction.

Hawass said that the expedition that is working in the East Valley is the largest excavation which has taken place since the time of Howard Carter. It is searching for tombs that have never been found before, as well as those of the wives and sons of the kings of the eighteenth dynasty buried in the Valley of the Kings, since the Valley of the Queens did not start taking on burials until the beginning of that dynasty. The expedition is working near the tomb of Ramses VII, the tomb of Hatshepsut, the tomb of Ramses III and behind the tomb of Merenptah, the son of Ramses II. The expedition also excavated the surroundings of Tutankhamun tomb. It found many important objects. Hawass announced all the details pertaining to these important discoveries during a press conference on Luxor’s West Bank on October 10, which was attended by Minister of Antiquities Khaled El-Enany and the secretary general of the Supreme Council of Antiquities Mostafa Waziri.

8- On September 29, Hawass travelled to the Italian city of Noto to give a lecture to promote Egyptian antiquities.

9- On September 29,The Egyptian Ministry of Antiquities announced that remains of a temple that belongs to the fourth pharaoh of Ptolemaic Egypt ,Ptolemy IV (221 – 204 BC), were discovered in Kom Shakau village in Tama township in northern Sohag. Secretary-general of the Supreme Council of Antiquities Mostafa Waziri said that the ruins include parts of the temple's walls with engravings and inscriptions holding the name of Ptolemy IV, as well as limestone walls and floors.

Waziri recounted that drilling works have been stopped to recover the temple remains. He further added that an archaeological mission has been assigned with recovering the ruins.

10- The exhibition "Tutankhamun: The Treasures of the Golden Pharaoh" came to an end in Paris on the evening of Sept. 22, breaking the record in the history of cultural exhibitions in France. The exhibition was visited by 1,423,170 visitors in the past six months since it was opened by the Minister of Antiquities on March 23, 2019 at the Grand Hall de la Villette. In 1967, when France hosted the Tutankhamun exhibition for the first time, it attracted 1,240,975 visitors. Today, 52 years later, the Golden King's exhibition attracted more than 1.4 million visitors, which indicates how passionate the French people and visitors of France are towards the ancient Egyptian civilization.

11- On September 16, Acclaimed Egyptian archaeologist Zahi Hawass said in an interview with Italia 1 Channel that the DNA tests will reveal a lot of information about the death of Tutankhamun and that he will announce to the whole world in 2020 how the golden king died.


12- On September 11, An ancient temple dating back to the Ptolemaic era was uncovered in a house in Sohag Governorate. Secretary General of the Supreme Council of Antiquities Mustafa Waziri said that the stones that were found in the village of Kom Ashqaw in the center of Tama, north of Sohag , is formed of limestone. The limestone was discovered during the work of a contracting company to complete the sewage project in the village.

13- On September 9, Egyptian archaeologist Zahi Hawass inaugurated the Museum of Archeological Models of King Tutankhamun, which was held in Curitiba, Brazil.
The inauguration was attended by Mayor of the city and Egyptian Commercial Advisor Mohammed al-Khatib, in addition to many of the city's cultural and political figures, and thousands of citizens. The museum contains archaeological models purchased from the workshops of the Ministry of Antiquities that reflect the story of the golden pharaoh Tutankhamun. Hawass supervised the establishment of the museum. The museum has models of military wheels, king's throne, cabin and canopic pots.

14- On September 2, Hawass gave an important lecture at the Italian university of Perugia. He tackled in his lecture issues pertaining to the royal mummies, the story of King Tutankhamen’s death and the harem conspiracy. The veteran archaeologist discussed as well the latest archaeological discoveries and excavations in the Valley of the Kings. Hawass added that archaeology requires study and research, revealing that only 30 percent of the Egyptian antiquities has been discovered so far.
"I am currently searching for the tomb of king Tutankhamen’s wife and Queen Nefertiti in the Valley of the Apes,"Hawass revealed during the lecture. Hawass stated that the discovery of King Khufu papyri in 2013 at Wadi El-Jarf port, 119 km south of Suez governorate, is considered the most important discovery in the 21st century, because it revealed the details of the construction of the Great Pyramid of Cheops, as well as the names of the construction workers, which is proof of the strong administrative system that existed during the king's reign. The papyri were uncovered by a Franco-Egyptian mission led by French Egyptologist Pierre Tallet and Egyptian Egyptologist Sayed Mahfouz. "Tutankhamen was not murdered;he died due to an unknown reason at the age of 19,"Hawass asserted. Following the first CT scan of Tutankhamen's mummy, the laboratory test didn’t find any evidence to support the theory of King Tutankhamen’s murder.

15- On December 28, Grand Egyptian Museum witnessed a celebration of breaking a new record at Guinness world Record by drawing a portrait of King Tutankhamun's mask made from 7260 coffee cups on Saturday, December 28. 16- On December 19, an Egyptian-German archaeological mission discovered a large part of a granodiorite colossus of a standing falcon-headed god Horus. 17- A small royal statue of a sphinx was uncovered in Tuna El-Gebel archaeological area in Minya governorate, Upper Egypt, on Saturday, December 14. The newly discovered sphinx which is made of limestone was uncovered by Egyptian Archaeological Mission headed by Sayed Abdel-Malek.

18- A unique royal bust of King Ramses II made of red granite was unearthed on a private land in Mit Rahina village in Giza by an Egyptian archaeological mission from the Ministry of Antiquities on Wednesday, December 11. 19- On November 27, The French archaeological mission headed by Frederic Colin succeeded in discovering three wooden coffins in the external courtyard of cemetery No. 33.