Egypt amazes the world with its discoveries in 2019 ( part 1) 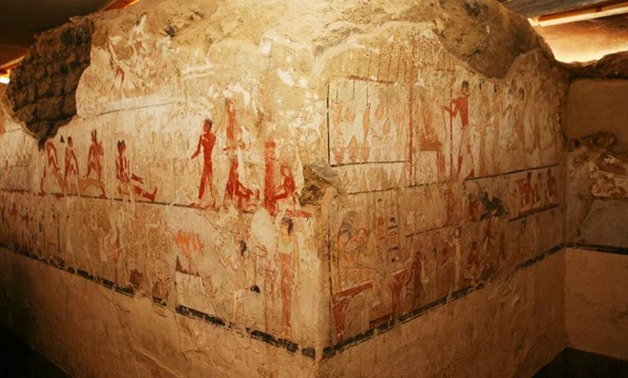 CAIRO - 29 December 2019: Over the last two years, a large number of new discoveries in Egypt have grabbed the world’s attention. Egypt Today will provide its readers with a capsule that contains all the discoveries that occurred in 2019, in addition to the most prominent archaeological events .


1- On August, the director of Antiquities Museum at Bibliotheca Alexandrina and the supervisor of Zahi Hawass center for Egyptology Hussein Abdel Baseer revealed that the famed ancient Egyptian Queen Hatsheput died because of cancer at the age of 50 and was a diabetes patient as well. Abdel Baseer announced that in a lecture entitled ‘’Egyptian Queens..Drama of Love and Power’’ at Zahi Hawass center for Egyptology. Hatshepsut the eldest of two daughters was born to King Thutmose and Queen Ahmse. After her father’s death, Hatshepsut married her half brother Thutmose ll.

2- On August 14, An exhibition marking the 100th anniversary of the beginning of Czech’s work in Egyptology opened in in Carolinum, Prague, Czech Republic.
The exhibition, held in Prague and Cairo, sheds light on the 20th century work of Czech in Egyptology and the works of the Czech Institute of Egyptology (CIE). It also showcases Czech's excavations in Egypt and Sudan.

3- On July 17, The Ministry of Antiquities said that the first restoration works of King Tut’s golden coffin started after it was transferred from the cemetery to the Grand Egyptian Museum. The Ministry of Antiquities began the restoration works of the wooden coffin of King Tutankhamen, which was transferred from the tomb of the King to the Grand Egyptian Museum a few days ago in preparation of presenting it in the Golden King Collection.

4- After 54 years Egyptian minister of Antiquities Khaled Anany inaugurated the Bent Pyramid of the Pharaoh King Sneferu and Alkaa Dogmatic pyramid in Giza’s Dahshur archaeology area on July 13. Anany said in his speech that now the two pyramids are opened for public for the first time since 1965. The inauguration ceremony was attended by a notable group of foreign ambassadors and representatives from UNESCO.

5- On July 13,the Ministry of Antiquities managed to discover an ancient winding wall that extends about 60 meters to the east of Amenemhat II pyramid. This wall is considered an important architectural element that dates back to the Middle kingdom era. A number of stone, pottery and wooden coffins were also found, some of which had mummies which were uncovered in good condition, in addition to a number of wooden masks some of them are incomplete and a set of tools that were used in cutting and polishing.

6- On June 28, The Ministry of Antiquities inaugurated the first royal cemetery dates back to the Middle Kingdom at the pyramid of Senusert II known as El-Lahun Pyramid located at Fayoum governorate. The inaugurated tomb is made of granite tomb and contains a granite coffin. It is accessed through a 15-meter-deep pathway below the earth's surface.

7- On May 30, the remains of an ancient house that was part of a residential complex from the Ptolemaic period was uncovered in Tuna el Gebel archaeological site.

8- On May 14, An Egyptian archaeological mission working at the Tell El-Kedwa site in North Sinai has uncovered the ruins of the north-eastern and south-eastern towers of a military fortress from ancient Egypt's 26th Dynasty. The uncovered fortress is made of mud brick, and was found during excavation work carried out by an Egyptian mission as part of the Sinai development project.

9- On May 9, an Egyptian archaeological mission which works in Wadi Abu Subeira, has discovered early royal inscriptions in the Eastern Desert northeast of Aswan. The inscriptions date back to the Neolithic period. Thousands of stone inscriptions from the Neolithic period were uncovered in a semi-enclosed circular valley, depicting scenes featuring animals that were living in the area at that time, such as giraffes, elephants and crocodiles.

11- On April 23, An Egyptian-Italian archaeological mission working at the Aga Khan Mausoleum area in Aswan has discovered a rock-cut tomb dating back to the late Pharaonic Graeco-Roman period. The mission found inside the tomb parts of a painted wooden coffin. The mission also discovered fragments of another coffin adorned with a complete text that mentioned the name of the tomb owner, his name is Tjt, and an invocation to the gods of the First Cataract; Khnum, Satet and Anuket, as well as Hapy, the Nile god.

12-On April 18, Ministry of Antiquities announced the discovery of a new saff tomb in the Draa Abul Naga necropolis on the West Bank of Luxor. It is the biggest 'saff' tomb to be ever discovered in the Theban necropolis. This discovery was “very important” because it changed the archaeological and historical map of the site as well as providing a new explanation of the architecture and design of individuals’ tombs in Draa Abul Naga.

13- On April 8, Egypt has unveiled the 2,500-year-old mummy of a high priest at an ancient cemetery south of Cairo. The sarcophagus of the ancient Egyptian high priest was opened on live TV by experts working with the Discovery Channel. The mummy was found beside a “mysterious wax head,” its features were so detailed. Hawass and an Egyptian team opened three sealed sarcophagi from the 26th Dynasty. The first one housed the well-preserved mummy of a powerful priest, wrapped in linen and decorated with a golden figure depicting Isis, an ancient Egyptian goddess. While the two other sarcophagi, one containing a female mummy decorated with blue beads and another with a father in a family tomb.

14- On April 5, a well-painted Ptolemaic-era tomb was discovered at Al-Dayabat archaeological site in Sohag governorate. The discovered tomb was to a nobleman called Toutou and his wife, a musician. It is a very small tomb from the Ptolemaic period, that is painted with beautiful scenes. 15-On April 2, An Egyptian archaeological mission has discovered the tomb of a Fifth Dynasty dignitary named Khuwy at south Saqqara. The tomb consists of a superstructure with an L-shaped offering chamber, which was once decorated with reliefs. Only the bottom part of this decoration is preserved, as the white limestone blocks of the other parts were re-used in the construction of other buildings in antiquity.
16- On April 1, an Egyptian archaeological mission discovered a limestone sarcophagus containing two mummies. The uncovered sarcophagus is two metres tall and 60cm wide and was found in good condition. The two discovered mummies inside were on top of each other, and were found in poor condition. 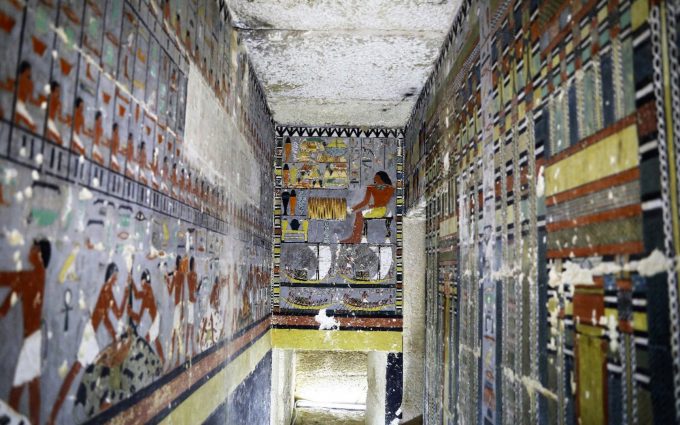 17- On March 29, New York University mission discovered a temple palace belonging to the 19th Dynasty king at Ramses II’s temple in Abydos, Sohag. This discovery was important because it contributed to the understanding of the development of the temple palaces during the Ramesside period.

18-- On March 21, Egyptian Minister of Antiquities Khaled Anany officially inaugurated the Tutankhamun, the Treasures of the Pharaoh exhibition in Paris.

19-- On February 26, a Swedish-Egyptian mission has discovered a New Kingdom sandstone workshop and several sculptures during excavations carried out at Gebel El-Silsila archaeological site in Aswan. The mission discovered among the debris in the workshop a large criosphinx (ram-headed sphinx) statue.

20- On February 21, the Egyptian embassy in Australia has received the last of four pieces of an ancient relief that had been smuggled out of Egypt in the 1990s.
21- On February 17, The Egyptian Ministry of Antiquities and the Ministry of Foreign Affairs, have succeeded in recovering an anthropoid gilded coffin of Nedjemankh, priest of the ram-god Heryshef, previously smuggled out of Egypt. The gilded coffin was purchased by the Metropolitan Museum in New York through an antiquities trader.
22- On February 13, Egyptian mission discovered the remains of a limestone building that was once a workshop for the construction and repair of boats and vessels during the Ptolemaic and Roman periods.

23- On February 2, a joint mission from the Egyptian ministry of antiquities and the Research Centre for Archaeological Studies at Minya University discovered a collection of Ptolemaic-era rock burial chambers, filled with a large number of mummies of different sizes and genders at Tuna El-Gebel necropolis in Minya governorate.

24-- On January 21, The English Archaeological Mission of the University of Birmingham working on Hawa Dome project in Aswan uncovered six tombs of different sizes dating back to the Old Kingdom. Head of the Supreme Council of Antiquities Mostafa Waziry explained that the discovered tombs range in dimensions between 190 x285 cm and 352 x 635 cm. Two of the tombs have entrances carved into the rock, while the third one has a complete entrance that is closed with stones; the entrance to its burial chamber is carefully closed by a brick wall. Despite all of the previous, it has been looted in ancient times by thieves who broke into the tomb through the back wall.